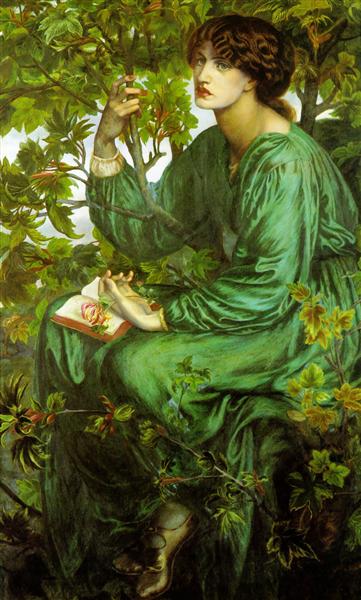 The Day Dream or, as it was initially intended to be named, Monna Primavera, is an oil on canvas painting by the Pre-Raphaelite Brotherhood founder Dante Gabriel Rossetti. The work, which measures 158.7 centimetres (62.5 in) in height by 92.7 centimetres (36.5 in) wide, was undertaken in 1880 and depicts Jane Morris posed in a seated position on the bough of a sycamore tree. A small stem of honeysuckle is in her hand, a token of love in the Victorian era, that may be an indication of the secret affair the artist was immersed in with her at the time. The artwork was left to the Victoria and Albert Museum by Constantine Alexander Ionides in 1900.

During 1878 Rossetti completed a chalk sketch of Morris, his secret lover, whom he had met at the Theatre Royal, Drury Lane, in 1857. She was the model for several of his well-known paintings, including Proserpine. The drawing was displayed above the mantlepiece in Rossetti's studio. Initially the painting was to be called Monna Primavera, or Vanna Primavera, possibly inspired by La Vita Nuova, a narrative that captivated Rossetti and was the basis for earlier pieces of his works of art. Rossetti was also a poet and penned sonnets to accompany several of his paintings; the last composition in his series entitled Sonnets for Pictures is associated with this painting. The sonnet reads:

Rossetti had not initially been fully satisfied with the painting and he made several revisions to it. He wrote to Morris apologising for copying the feet of another woman to the picture. An earlier painting of Morris, entitled The Salutation of Beatrice, had similarly used a different model's hands in the final version.

Morris is posed in seated position on the bough of a sycamore tree. A small stem of honeysuckle is in her hand, a token of love in the Victorian era and may be an indication of the secret affair the artist was immersed in with her at the time. Unusually for Rossetti work during this time – this is one of his last paintings – the model is pictured full length. The painting is signed "D. Rossetti 1880" on the lower right.

The scene is a representation of a young woman in a green silk dress, shaded by the arabesque of the winged sycamore tree's leaves. Above her head and around her the tree branches are depicted almost embracing her, or as if she was emerging from the tree itself, almost as a dryad, or tree nymph. She is portrayed clad all in green, her dress is a romantic wide and loose silk robe, flowing in graceful folds down, blending in with the tree's leaves, that connects the subject and its surroundings visually. She is immersed in her day dreams, turning her gaze downwards, away, towards something unseen or perhaps only perceived by her. The depiction of the young, elegant woman in her shelter surrounded by the branches, is adding to the secretive feeling of the painting, maybe indicating the furtiveness of the affair or a clandestine meeting place. In the shelter it is dark, but around her shoulder there is light, light blue compartments against a dark green background, signalling that it is daytime.