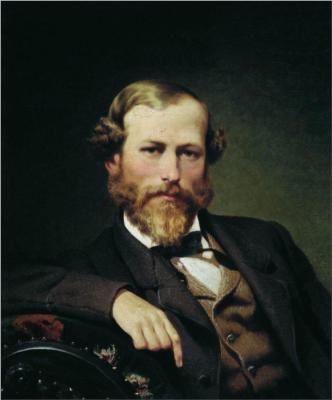 His most famous painting is Princess Tarakanova, in the Peter and Paul Fortress at the Time of the Flood based on the legend of the death of Yelizaveta Alekseyevna Tarakanova, the daughter of Aleksey Grigorievich Razumovsky and Elizabeth of Russia in her prison cellar during the flood in Saint Petersburg.

"In his art Konstantin Flavitsky adhered to classical traditions, the principles bequeathed by K.P.Bryullov. His creative heritage is not extensive and he is known primarily as the author of the painting Princess Tarakanova. The work is based on a legend from Russian history according to which Princess Tarakanova, who said she was the daughter of Empress Elizabeth and Alexei Razumovsky and laid claim to the Russian throne in Catherine the Great's reign, died in the Peter and Paul Fortress during the flood of 1777. Flavitsky depicts with great tragic power the suffering of this young woman facing certain death in a gloomy dungeon flooded with water, depicting her helplessness and despair most expressively." (Masterpieces of the State Tretyakov Gallery, Red Square Publishers, ISBN 978-5-900743-36-3)

On 25 September 1980, the Soviet Union issued a 6 kopek postage stamp commemorating the 150th anniversary of his birth (together with that of Nikolai Nevrev).