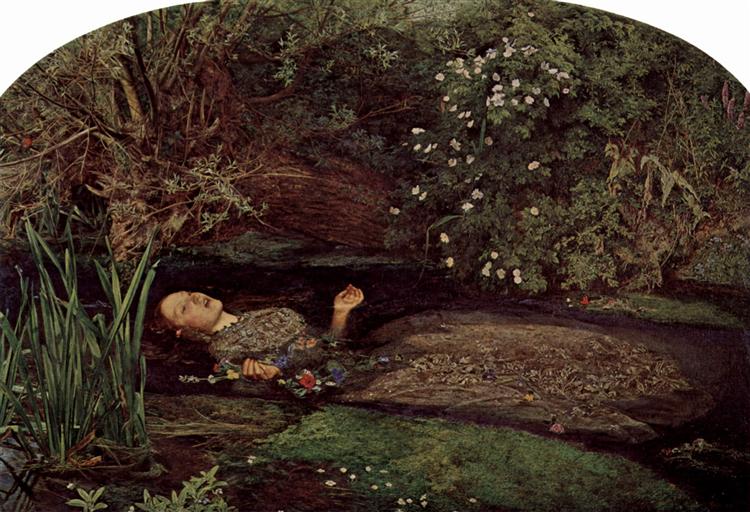 Ophelia is a painting by British artist Sir John Everett Millais, completed between 1851 and 1852. It is held in the Tate Britain in London. It depicts Ophelia, a character from William Shakespeare's play Hamlet, singing before she drowns in a river in Denmark.

The work was not highly regarded when first exhibited at the Royal Academy, but has since come to be admired for its beauty and its accurate depiction of a natural landscape.

The painting depicts Ophelia singing while floating in a river just before she drowns. The scene is described in Act IV, Scene VII of Hamlet in a speech by Queen Gertrude.

The episode depicted is not seen onstage, but exists only in Gertrude's description. Ophelia has fallen into the river from a tree overhanging it, while gathering flowers. She lies in the water singing songs, as if unaware of her danger ("incapable of her own distress"). Her clothes, trapping air, have allowed her to temporarily stay afloat ("Her clothes spread wide, / And, mermaid-like, awhile they bore her up."). But eventually, "her garments, heavy with their drink, / Pull'd the poor wretch from her melodious lay" down "to muddy death".

Ophelia's death has been praised as one of the most poetically written death scenes in literature.

The painting is known for its depiction of the detailed flora of the river and the riverbank, stressing the patterns of growth and decay in a natural ecosystem. Despite its nominal Danish setting, the landscape has come to be seen as quintessentially English. Ophelia was painted along the banks of the Hogsmill River in Surrey, near Tolworth, Greater London. Barbara Webb, a resident of nearby Old Malden, devoted much time to finding the exact placement of the picture, and according to her research, the scene is located at Six Acre Meadow, alongside Church Road, Old Malden. Millais Road is now nearby. Millais' close colleague William Holman Hunt was at the time working on his The Hireling Shepherd nearby.

At an early stage in the painting's creation, Millais painted a water vole—which an assistant had fished out of the Hogsmill—paddling next to Ophelia. In December 1851, he showed the unfinished painting to Holman Hunt's relatives. He recorded in his diary, "Hunt's uncle and aunt came, both of whom understood most gratifyingly every object except my water rat. The male relation, when invited to guess at it, eagerly pronounced it to be a hare. Perceiving by our smiles that he had made a mistake, a rabbit was then hazarded. After which I have a faint recollection of a dog or a cat being mentioned." Millais painted the water vole out of the final picture, although a rough sketch of it still exists in an upper corner of the canvas hidden by its frame.