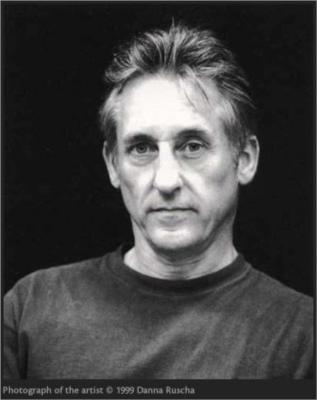 Edward Ruscha is a pioneer of the Los Angeles 1960s art scene, who is often associated with the Pop Art movement. Throughout his long and prolific career, he has worked in a variety of mediums: painting, printing, photography and film. Edward Ruscha was born in 1937 in Omaha, Nebraska, and was later raised in Oklahoma City. At the age of eighteen, he moved to Los Angeles, where he studied at the Chouinard Art Institute (now the California Institute of Arts) from 1956 to 1960. Initially, Ruscha intended to focus on commercial art, and early on, he worked in advertising as a layout artist and a sign painter. Even though he ultimately gravitated toward fine art, his experience and knowledge of advertising proved significant and influenced his style and choice of subject.

There are several early influences that helped shape Ruscha’s artistic identity. One of these was conceptual French artist, Marcel Duchamp, who Ruscha met when the Pasadena Art Museum held Duchamp’s first U.S retrospective. In particular, Ruscha was interested in Duchamp’s ‘readymade’ objects that were transformed through unexpected titles and a clever use of text. Another important influence was Pop Art: he saw Roy Lichtenstein’s paintings at the Leo Castelli Gallery in New York, and Andy Warhol’s Campbell’s soup can paintings at the Ferus Gallery in Los Angeles. Beyond these artistic influences, Los Angeles also played a significant role in Ruscha’s art: paintings like Large Trademark with Eight Spotlights (1962) and Hollywood (1969) referenced the city’s landscape and its association with the entertainment and movie industry.

Ruscha rose to prominence during the 1960s with paintings, such as Large Trademark with Eight Spotlights (1962), Actual Size (1962) and Standard Station (1966). These depictions of mundane scenes and objects related to broader issues of consumerism and mass culture. Additionally Ruscha gained attention for his word paintings like Honk (1962). Toward the end of the 1960s, he further developed this theme with ‘liquid word’ paintings, like Adios (1967) and City (1969). Throughout his career, Ruscha continuously explored the relationship between art and text, often painting seemingly random words and phrases. In the 1980s, he even developed a font called Boy Scout Utility Modern, which he described as ‘non-style’ typeface. In works like Not A Bad World, Is It? (1984) and Daily Planet (2003) he uses the font to covers natural landscapes with common phrases and words.

Another interesting aspect of Ruscha’s art is his fondness for experimentation. During the 1970s he worked with a variety of materials, for instance the work Dance? (1973) was made with multiple edible ingredients like coffee, egg white and mustard. In the 1980s, he began painting with an airbrush, with which he produced a group of paintings featuring silhouettes of animals, ships and wagon trains. Even though the subjects were humorous and cartoonish, the works had an ominous and dark atmosphere that was new to Ruscha’s body of work. Paintings like Rabbit (1986) have a murky, nocturnal glow that can be both comforting and threatening. Considered one of the most iconic artist of the 20th century, Ruscha is still active, living and working in Southern California.

Edward Joseph Ruscha IV (roo-SHAY; born December 16, 1937) is an American artist associated with the pop art movement. He has worked in the media of painting, printmaking, drawing, photography, and film. Ruscha lives and works in Culver City, California.

Ruscha was born into a Roman Catholic family in Omaha, Nebraska, with an older sister, Shelby, and a younger brother, Paul. Edward Ruscha, Sr. was an auditor for Hartford Insurance Company. Ruscha’s mother was supportive of her son’s early signs of artistic skill and interests. Young Ruscha was attracted to cartooning and would sustain this interest throughout his adolescent years. Though born in Nebraska, Ruscha lived some 15 years in Oklahoma City before moving to Los Angeles in 1956 where he studied at the Chouinard Art Institute (now known as the California Institute of the Arts) under Robert Irwin and Emerson Woelffer from 1956 through 1960. While at Chouinard, Ruscha edited and produced the journal "Orb" (1959–60) together with Joe Goode, Emerson Woelffer, Stephan von Huene, Jerry McMillan, and others. Ruscha spent much of the summer of 1961 traveling through Europe. After graduation, Ruscha took a job as a layout artist for the Carson-Roberts Advertising Agency in Los Angeles.

By the early 1960s he was well known for his paintings, collages, and photographs, and for his association with the Ferus Gallery group, which also included artists Robert Irwin, John Altoon, John McCracken, Larry Bell, Ken Price, and Edward Kienholz. He worked as layout designer for Artforum magazine under the pseudonym “Eddie Russia” from 1965 to 1969 and taught at UCLA as a visiting professor for printing and drawing in 1969. He is also a lifelong friend of guitarist Mason Williams.

While in school in 1957, Ruscha chanced upon then unknown Jasper Johns’ Target with Four Faces in the magazine Print and was greatly moved. Ruscha has credited these artists’ work as sources of inspiration for his change of interest from graphic arts to painting. He was also impacted by John McLaughlin's paintings, the work of H.C. Westermann, Arthur Dove’s 1925 painting Goin’ Fishin’, Alvin Lustig's cover illustrations for New Directions Press, and much of Marcel Duchamp’s work. In a 1961 tour of Europe, Ruscha came upon more works by Johns and Robert Rauschenberg, R. A. Bertelli’s Head of Mussolini, and Ophelia by Sir John Everett Millais. Some critics are quick to see the influence of Edward Hopper's Gas (1940) in Ruscha's 1963 oil painting, Standard Station, Amarillo, Texas. In any case, "Art has to be something that makes you scratch your head," Ruscha said.

Although Ruscha denies this in interviews, the vernacular of Los Angeles and Southern California landscapes contributes to the themes and styles central to much of Ruscha’s paintings, drawings, and books. Examples of this include the publication Every Building on the Sunset Strip (1966), a book of continuous photographs of a two and one half mile stretch of the 24 mile boulevard. In 1973, following the model of Every Building on the Sunset Strip, he photographed the entire length of Hollywood Boulevard with a motorized camera. Also, paintings like Standard Station (1966), Large Trademark (1962), and Hollywood (1982) exemplify Ruscha’s kinship with the Southern California visual language. Two of these paintings, Standard and Large Trademark were emulated out of car parts in 2008 by Brazilian photographer Vik Muniz as a commentary on Los Angeles and its car culture.