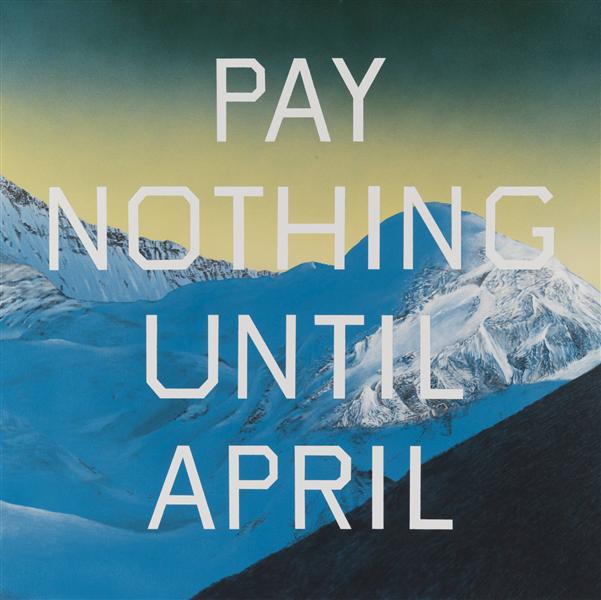 Pay Nothing Until April

Pay Nothing Until April (2003) by Edward Ruscha belongs to a large group of paintings, which depict a natural landscape overlayed with text. Ruscha used the scheme for nearly five decades: from early examples in the 1980s such as Not A Bad World, Is It? (1984) up to recent paintings such as Wall Rocket (2013) and Tulsa Slut (2016).

Pay Nothing Until April depicts snow-covered mountaintops against a yellow sky, that signifies a sunset or a sunrise. For paintings like Pay Nothing Until April the artist usually appropriated landscapes from postcard images of different mountain ranges. The process of creating the painting began with a thin layer of paint sprayed onto the canvas. Later, the artist worked on the landscape in acrylic paint, and finally applied the lettering by using stencils. The font, named Boy Scout Utility Modern, was designed by Ruscha in the 1980s. The artist described it as a ‘no style’ typeface, and he has used it in many of his subsequent works.

When describing the concept behind painting, Ruscha stated: ‘It’s not a celebration of nature. I’m not trying to show beauty. It’s more like I’m painting ideas of ideas of mountains. The concept came to me as a logical extension of the landscapes that I’ve been painting for a while – horizontal landscapes, flatlands, the landscape I grew up in. Mountains like this were only ever a dream to me; they meant Canada or Colorado’. In other words, Ruscha purposefully chose to paint the landscape in an impersonal and detached manner from distant images found on souvenirs. Combined with the text ‘Pay Nothing Until April’, the painting is reminiscent of a poster in the window or an advertising for a bargain ski holiday. In particular, the text is similar to the advertising slogan formula ‘Buy Now, Pay Nothing until April’. Advertising and consumer culture are consistent themes in Ruscha’s art. Pay Nothing Until April continues this exploration by mimicking the aesthetic of mass produced culture.

Another important element in Ruscha’s art is his living and working environment, the city of Los Angeles. In particular, Los Angeles as the center of the entertainment industry has played a significant role in Ruscha’s work in paintings like Large Trademark with Eight Spotlights (1962) and his photo book, Every Building on the Sunset Strip (1966). The mountain peaks of Pay Nothing Until April can be linked to visual images from adventure movies such as the James Bond film On Her Majesty’s Secret Service (1969). Another possible inspiration was the logo of Paramount Pictures, one of Hollywood’s largest production companies. Through these associations to consumerist imagery and culture, the artist removed the mystique and sublime qualities of the natural landscape. Unlike the sublime landscapes of the 19th century European Romantic painters, that celebrated the power and greatness of nature, Ruscha’s painting embraces the banality of consumerist culture by covering the landscape with an advertising slogan. This is also a reflection of Los Angeles, a place Ruscha called ‘the ultimate cardboard town’.