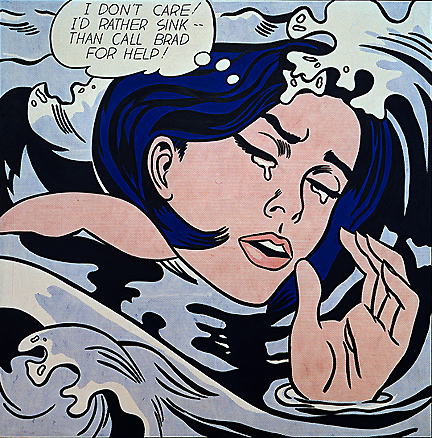 Pop art started with the New York artists Andy Warhol, Roy Lichtenstein, James Rosenquist, and Claes Oldenburg, all of whom drew on popular imagery and were actually part of an international phenomenon. Following the popularity of the Abstract Expressionists, Pop's reintroduction of identifiable imagery (drawn from mass media and popular culture) was a major shift for the direction of modernism. The subject matter became far from traditional "high art" themes of morality, mythology, and classic history; rather, Pop artists celebrated commonplace objects and people of everyday life, in this way seeking to elevate popular culture to the level of fine art. Perhaps owing to the incorporation of commercial images, Pop art has become one of the most recognizable styles of modern art.

The pre-history of Pop art is rooted in the UK. In 1952, a gathering of artists in London calling themselves the Independent Group began meeting regularly to discuss topics such as mass culture's place in fine art, the found object, and science and technology. Members included Eduardo Paolozzi, Richard Hamilton, architects Alison and Peter Smithson, and critics Lawrence Alloway and Reyner Banham. Britain in the early 1950s was still emerging from the austerity of the post-war years, and its citizens were ambivalent about American popular culture. While the group was suspicious of its commercial character, they were enthusiastic about the rich world pop culture that seemed to promise for the future. The imagery they discussed at length included that found in Western movies, science fiction, comic books, billboards, automobile design, and rock and roll music.

The actual term "Pop art" has several possible origins: the first use of the term in writing has been attributed to both Lawrence Alloway and Alison and Peter Smithson, and alternately to Richard Hamilton, who defined Pop in a letter, while the first artwork to incorporate the word "Pop" was produced by Paolozzi. His collage I Was a Rich Man's Plaything (1947) contained cut-up images of a pinup girl, Coca-Cola logo, cherry pie, World War II bomber, and a man's hand holding a pistol, out of which burst the world "POP!" in a puffy white cloud.

By the mid-1950s, the artists working in New York City faced a critical juncture in modern art: follow the Abstract Expressionists or rebel against the strict formalism advocated by many schools of modernism. By this time, Jasper Johns was already troubling conventions with abstract paintings that included references to: "things the mind already knows" - targets, flags, handprints, letters, and numbers. Meanwhile, Robert Rauschenberg's "combines" incorporated found objects and images, with more traditional materials like oil paint. Similarly, Allan Kaprow's "Happenings" and the Fluxus group chose to incorporate aspects from the surrounding world into their art. These artists, along with others, later became grouped in the movement known as Neo-Dada. The now-classic New York Pop art of Roy Lichtenstein, Claes Oldenburg, James Rosenquist, and Andy Warhol emerged in 1960 in the footsteps of the Neo-Dadaists.

Once the transition from the found-object constructions of the Neo-Dada artists to the Pop movement was complete, there was widespread interest on the part of artists in the incorporation of popular culture into their work. Although artists in the Independent Group in London initiated the use of "pop" in reference to art, American artists soon followed suit and incorporated popular culture into their artwork as well. Although the individual styles vary widely, all of the artists maintain a commonality in their choice of popular culture imagery as their fundamental subject. Shortly after American Pop art arrived on the art world scene, mainland European variants developed in the Capitalist Realist group in Germany and the Nouveau Réalisme movement in France.

As opposed to New York City, the art world of Los Angeles was much less rigid, lacking the established galleries, critics, and hierarchies of the east coast; this openness is reflected in the styles of the artists who lived and worked there. The first museum survey of Pop art, New Painting of Common Objects, was held at the Pasadena Art Museum in 1962, and showcased Warhol and Lichtenstein as well as many artists living in Los Angeles including Ed Ruscha, Joe Goode, Phillip Hefferton, Wayne Thiebaud, and Robert Dowd. Other Los Angeles artists, like Billy Al Bengston, incorporated a different kind of aesthetic into their version of Pop, utilizing new materials such as automobile paint and referencing surfing and motorcycles in works that make the familiar strange through new and unexpected combinations of images and media. By shifting the focus away from specific consumer goods, these artists allowed Pop art to move beyond replication to incorporate the experience and evoke a particular feeling, attitude, or idea, while also pushing the boundaries between high art and popular culture.

Pop art would continue to influence art in later decades, with artists like Warhol maintaining a larger-than-life presence within the New York art world into the 1980s. Pop fell out of favor during the 1970s as the art world shifted focus from art objects to installations, performances, and other less tangible art forms. However, with the revival of painting at the end of the 1970s and in the early 1980s, the art object came back into favor once again, and popular culture provided subject matter that was easy for viewers to identify and understand. One of the leading figures of the Neo-Pop movement was Jeff Koons, whose appropriation of pop culture icons such as Michael Jackson and mass-produced objects like Hoover vacuum cleaners further pushed the boundaries of high art. In Japan, the work of Takashi Murakami has been cited as a more recent example of Neo-Pop, due to his use of popular anime imagery in his Superflat style and his successful partnering with fashion labels like Louis Vuitton. Such artists continue to break down the barrier between high and low art forms while reevaluating the role of art as a commodity in and of itself.