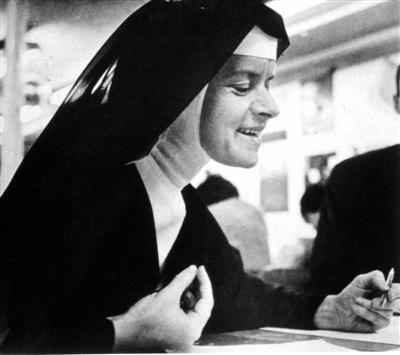 
Corita was born Frances Elizabeth Kent on November 20th in the year of 1918. As a woman from a working poor family, there were not a lot of options for her in terms of work. At 18 years of age Kent entered the Sisters of the Immaculate Heart, which were known to be very progressive and welcomed creativity. Frances joined a teaching order, taking the name Sister Mary Corita. Initially she taught young children on an Inuit Reservation in British Columbia until returning to Los Angeles to study for her bachelor's degree at Immaculate Heart College and her master's degree at University of Southern California. She was the head of the art department at Immaculate Heart College. where she also taught a wide variety of different painting styles. Her artwork contained her own spiritual expression and love for her God.


Sister Corita Kent's primary medium was silk screen, also known as Serigraphy. She became self-taught after she sent away for a
DIY silk screening kit. Her innovative methods pushed back the limitations of two-dimensional media of the times. Kent's emphasis on printing was partially due to her wish for democratic outreach, as she wished for affordable art for the masses. Her artwork, with its messages of love and peace, was particularly popular during the social upheavals of the 1960s and 1970s. After a cancer diagnosis in the early 1970s, she entered an extremely prolific period in her career, including the Rainbow Swash design on the LNG storage tank in Boston, and the 1985 version of the United States Postal Service's special Love stamp.


In recent years, Corita has gained increased recognition for her role in the pop art movement. Critics and theorists previously failed to count her work as part of any mainstream "canon," but in the last few years there has been a resurgence of attention given to Kent. As both a nun and a woman making art in the twentieth century, she was in many ways cast to the margins of the different movements she was a part of.


Corita's art was her activism, and her spiritually-informed social commentary promoted love and tolerance.


Frances Elizabeth Kent was born in Fort Dodge, Iowa in 1918. Upon entering the Roman Catholic order of Sisters of the Immaculate Heart of Mary in Los Angeles in 1936, Kent took the name Sister Mary Corita. She took classes at Otis (now Otis College of Art and Design) and Chouinard Art Institute and earned her BA from Immaculate Heart College in 1941. She earned her MA at the University of Southern California in Art History in 1951.


Between 1938 and 1968 Kent lived and worked in the Immaculate Heart Community. She taught in the Immaculate Heart College and became the chair of its art department in 1964. Her classes at Immaculate Heart were an avant-garde mecca for prominent, ground-breaking artists and inventors, such as Alfred Hitchcock, John Cage, Saul Bass, Buckminster Fuller and Charles & Ray Eames. Kent credited Charles Eames, Buckminster Fuller, and art historian Dr. Alois Schardt for their important roles in her intellectual and artistic growth. By the early 1950s, she had such a unique and well-known aesthetic and teaching style that clergy members from all over the country were sent to be educated at Immaculate Heart College. Her students were drawn to her selflessness and unique teaching methods such as large class assignments like asking students to create 200 drawings or take three hours to draw their arm without looking at what they were creating.