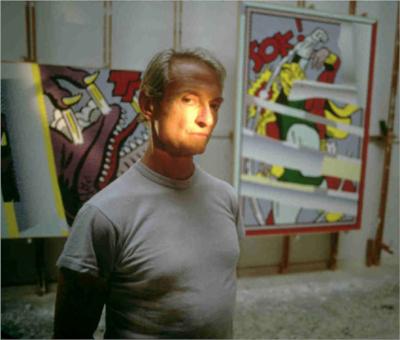 Roy Lichtenstein is one of the key figures of the Pop Art movement in America along with Andy Warhol, Jasper Johns, and James Rosenquist. Lichtenstein was born in 1923 in New York to an upper-middle-class Jewish family. He showed an affinity for art from a young age, and later went to Ohio University where he was able to take art classes. Lichtenstein was drafted into the US Army in 1943 and served for three years, before returning to Ohio University, where he completed his studies and later worked as an art instructor.

In 1951, he had his first solo show at the Carlebach Gallery in New York. In these early phases of his career, he painted in an abstract style, which was then dominant in America. He incorporated cartoon characters like Donald Duck and Mickey Mouse in some of his early works that were later destroyed. In the early 1960s, Lichtenstein fully embraced these themes, making an artistic breakthrough with the painting Look Mickey (1961). Lichtenstein appropriated the scene from popular culture, showing the two Disney icons, Mickey Mouse and Donald Duck in a humorous situation. This marked the emergence of his signature style, which drew inspiration from mass-produced popular images in comic books and advertisements.

Comic books were one of the primary sources for Lichtenstein’s paintings in the early 1960s. In paintings like Bratatat! (1963) and Sleeping girl (1964) he imitated the tradition of comic strips: the thick black lines that outline areas of primary colors and uniform area of Ben-Day dots that were used in the printing process of inexpensive publications. The hand-painted Ben-Day dots became a signature element of Lichtenstein’s style, allowing him to incorporate the look of mechanical reproduction into the traditional medium of painting. He found the style of comic books particularly appealing because it allowed him to depict emotionally charged subject matters, like love and war in a detached and calculated manner. The paintings brought Lichtenstein mainstream success, but initially, he also received harsh criticism. He was accused of counterfeiting commercial images and was even called one of the worst artists in America.

Even though Lichtenstein turned away from comic book motifs in the mid-1960s, he continued to emulate the aesthetic and style of popular imagery. Lichtenstein began exploring art as the subject matter of his paintings by recreating masterpieces of artists like Pablo Picasso, Piet Mondrian, and Vincent Van Gogh. He reinterpreted these works in his Pop art style, and in paintings like Modern Art I (1996) Lichtenstein reevaluated the legacy of Picasso and the Cubist movement. These paintings had elements of irony and parody, but they were mainly homages. Modern Art I adapted Cubist painting to a contemporary society, dominated by mass-produced commercial images. In his art, Lichtenstein bridged between ‘high’ and ‘low’ art: he combined the style of commercial imagery with the traditional medium of painting.

Although Lichtenstein was primarily known as a painter, he worked in other media like sculpture and printmaking. Throughout his career, he received a major commission for artworks in public spaces. Among these is Mural with Blue Brushstroke (1986) in the atrium of the Equitable Tower in New York City and El Cap de Barcelona (1991-1992) created for the 1992 Olympics in Barcelona, Spain. In August 1997, Lichtenstein fell ill with pneumonia and died unexpectedly on September 29, 1997, of complications from the disease.

Roy Fox Lichtenstein (pronounced /ˈlɪktənˌstaɪn/; October 27, 1923 – September 29, 1997) was an American pop artist. During the 1960s, along with Andy Warhol, Jasper Johns, and James Rosenquist among others, he became a leading figure in the new art movement. His work defined the premise of pop art through parody. Inspired by the comic strip, Lichtenstein produced precise compositions that documented while they parodied, often in a tongue-in-cheek manner. His work was influenced by popular advertising and the comic book style. He described pop art as "not 'American' painting but actually industrial painting". His paintings were exhibited at the Leo Castelli Gallery in New York City.

Whaam! and Drowning Girl are generally regarded as Lichtenstein's most famous works, with Oh, Jeff...I Love You, Too...But... arguably third. Drowning Girl, Whaam! and Look Mickey are regarded as his most influential works. His most expensive piece is Masterpiece, which was sold for $165 million in January 2017.

Lichtenstein was born in New York, into an upper-middle-class Jewish family. His father, Milton, was a real estate broker, his mother, Beatrice (Werner), a homemaker. He was raised on the Upper West Side and attended public school until the age of twelve. He then attended New York's Dwight School, graduating from there in 1940. Lichtenstein first became interested in art and design as a hobby, through school. He was an avid jazz fan, often attending concerts at the Apollo Theater in Harlem. He frequently drew portraits of the musicians playing their instruments. In his last year of high school, 1939, Lichtenstein enrolled in summer classes at the Art Students League of New York, where he worked under the tutelage of Reginald Marsh.

Lichtenstein then left New York to study at Ohio State University, which offered studio courses and a degree in fine arts. His studies were interrupted by a three-year stint in the Army during and after World War II between 1943 and 1946. After being in training programs for languages, engineering, and pilot training, all of which were cancelled, he served as an orderly, draftsman, and artist.

Lichtenstein returned home to visit his dying father and was discharged from the Army with eligibility for the G.I. Bill. He returned to studies in Ohio under the supervision of one of his teachers, Hoyt L. Sherman, who is widely regarded to have had a significant impact on his future work (Lichtenstein would later name a new studio he funded at OSU as the Hoyt L. Sherman Studio Art Center).

Lichtenstein entered the graduate program at Ohio State and was hired as an art instructor, a post he held on and off for the next ten years. In 1949 Lichtenstein received a Master of Fine Arts degree from Ohio State University.

In 1951, Lichtenstein had his first solo exhibition at the Carlebach Gallery in New York. He moved to Cleveland in the same year, where he remained for six years, although he frequently traveled back to New York. During this time he undertook jobs as varied as a draftsman to a window decorator in between periods of painting. His work at this time fluctuated between Cubism and Expressionism. In 1954, his first son, David Hoyt Lichtenstein, now a songwriter, was born. His second son, Mitchell Lichtenstein, was born in 1956.