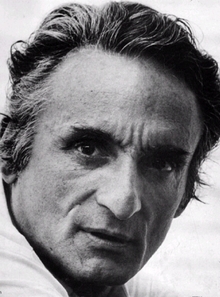 Larry Rivers was born in the Bronx to Samuel and Sonya Grossberg, Jewish immigrants from Ukraine. From 1940–45 he worked as a jazz saxophonist in New York City, changing his name to Larry Rivers in 1940 after being introduced as "Larry Rivers and the Mudcats" at a local pub. He studied at the Juilliard School of Music in 1945–46, along with Miles Davis, with whom he remained friends until Davis's death in 1991.

Rivers is considered by many scholars to be the "Godfather" and "Grandfather" of Pop art, because he was one of the first artists to really merge non-objective, non-narrative art with narrative and objective abstraction.

Rivers took up painting in 1945 and studied at the Hans Hofmann School from 1947–48. He earned a BA in art education from New York University in 1951. He was a pop artist of the New York School, reproducing everyday objects of American popular culture as art. He was one of eleven New York artists featured in the opening exhibition at the Terrain Gallery in 1955. During the early 1960s Rivers lived in the Hotel Chelsea, notable for its artistic residents such as Bob Dylan, Janis Joplin, Leonard Cohen, Arthur C. Clarke, Dylan Thomas, Sid Vicious and multiple people associated with Andy Warhol's Factory and where he brought several of his French nouveau réalistes friends like Yves Klein who wrote there in April 1961 his Manifeste de l'hôtel Chelsea, Arman, Martial Raysse, Jean Tinguely, Niki de Saint-Phalle, Christo, Daniel Spoerri or Alain Jacquet, several of whom left, like him, some pieces of art in the lobby of the hotel : for payment of their rooms. In 1965 Rivers had his first comprehensive retrospective in five important American museums.

His final work for the exhibition was The History of the Russian Revolution, which was later on extended permanent display at the Hirshhorn Museum and Sculpture Garden in Washington, DC. During 1967 he was in London collaborating with the American painter Howard Kanovitz. In 1968, Rivers traveled to Africa for a second time with Pierre Dominique Gaisseau to finish their documentary Africa and I, which was a part of the groundbreaking NBC series "Experiments in Television". During this trip they narrowly escaped execution as suspected mercenaries.

During the 1970s Rivers worked closely with Diana Molinari and Michel Auder on many video tape projects, including the infamous Tits, and also worked in neon.

Rivers married Augusta Berger in 1945, and they had one son, Steven. Rivers also adopted Berger's son from a previous relationship, Joseph, and reared both children after the couple divorced. He married Clarice Price in 1961, a Welsh school teacher who cared for his two sons. Rivers and Clarice Price had two daughters, Gwynne and Emma. After six years, they separated.

Shortly after, he lived and collaborated with Diana Molinari, who featured in many of his works of the 1970s. After that Rivers lived with Sheila Lanham, a Baltimore artist and poet. In the early 1980s, Rivers and East Village figurative painter Daria Deshuk lived together and in 1985 they had a son, Sam Deshuk Rivers (now Sam D. Rivers). At the time of his death in 2002, poet Jeni Olin was his companion. Rivers also sustained a relationship with poet Frank O'Hara in the late 1950s and delivered the eulogy at O'Hara's funeral in 1966.