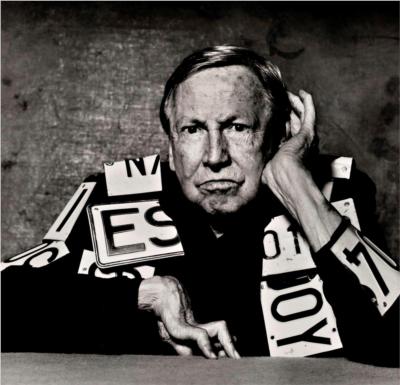 Milton Ernest "Robert" Rauschenberg (October 22, 1925 – May 12, 2008) was an American painter and graphic artist whose early works anticipated the pop art movement. Rauschenberg is well known for his "Combines" of the 1950s, in which non-traditional materials and objects were employed in innovative combinations. Rauschenberg was both a painter and a sculptor and the Combines are a combination of both, but he also worked with photography, printmaking, papermaking, and performance.

He was awarded the National Medal of Arts in 1993. He became the recipient of the Leonardo da Vinci World Award of Arts in 1995 in recognition of his more than 40 years of fruitful artmaking.

Rauschenberg lived and worked in New York City as well as on Captiva Island, Florida until his death from heart failure on May 12, 2008.

Rauschenberg was born as Milton Ernest Rauschenberg in Port Arthur, Texas, the son of Dora Carolina (née Matson) and Ernest R. Rauschenberg. His father was of German and Cherokee ancestry and his mother of Anglo-Saxon descent. His parents were Fundamentalist Christians. Rauschenberg was dyslexic.

At 16, Rauschenberg was admitted to the University of Texas where he began studying pharmacy. He was drafted into the United States Navy in 1943. Based in California, he served as a mental hospital technician until his discharge in 1945.

Rauschenberg subsequently studied at the Kansas City Art Institute and the Académie Julian in Paris, France, where he met the painter Susan Weil. In 1948 Rauschenberg and Weil decided to attend Black Mountain College in North Carolina.

Josef Albers, a founder of the Bauhaus, became Rauschenberg's painting instructor at Black Mountain. Albers' preliminary courses relied on strict discipline that did not allow for any "uninfluenced experimentation". Rauschenberg described Albers as influencing him to do "exactly the reverse" of what he was being taught.

From 1949 to 1952 Rauschenberg studied with Vaclav Vytlacil and Morris Kantor at the Art Students League of New York, where he met fellow artists Knox Martin and Cy Twombly.

Rauschenberg married Susan Weil in the summer of 1950 at the Weil family home in Outer Island, Connecticut. Their only child, Christopher, was born July 16, 1951. The two separated in June 1952 and divorced in 1953. According to a 1987 oral history by the composer Morton Feldman, after the end of his marriage, Rauschenberg had romantic relationships with fellow artists Cy Twombly and Jasper Johns. An article by Jonathan D. Katz states that Rauschenberg's affair with Twombly began during his marriage to Susan Weil.

Rauschenberg's approach was sometimes called "Neo Dadaist," a label he shared with the painter Jasper Johns. Rauschenberg was quoted as saying that he wanted to work "in the gap between art and life" suggesting he questioned the distinction between art objects and everyday objects, reminiscent of the issues raised by the "Fountain", by Dada pioneer, Marcel Duchamp. At the same time, Johns' paintings of numerals, flags, and the like, were reprising Duchamp's message of the role of the observer in creating art's meaning.