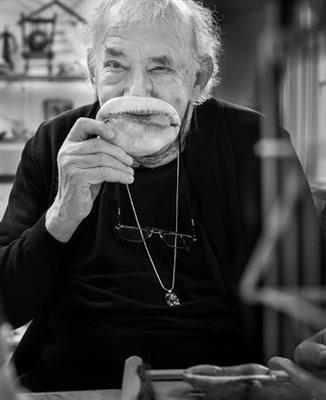 Daniel Spoerri (born 27 March 1930 in Galați) is a Swiss artist and writer born in Romania. Spoerri is best known for his "snare-pictures," a type of assemblage or object art, in which he captures a group of objects, such as the remains of meals eaten by individuals, including the plates, silverware and glasses, all of which are fixed to the table or board, which is then displayed on a wall. He also is widely acclaimed for his book, Topographie Anécdotée* du Hasard (An Anecdoted Topography of Chance), a literary analog to his snare-pictures, in which he mapped all the objects located on his table at a particular moment, describing each with his personal recollections evoked by the object.

Spoerri was born Daniel Isaac Feinstein, on 27 March 1930, in Galați, Romania. Although his father, Isaac Feinstein, had converted to Christianity, after Romania entered the War on the side of Nazi Germany he was arrested and killed in 1941. His mother, born Lydia Spoerri, was Swiss and was therefore able to emigrate with her family of 6 children to Switzerland in 1942. There, he was adopted by his maternal uncle Professor Theophil Spoerri and registered as Daniel Spoerri, a name he has retained.

In the 1950s he was active in dance, studying classical dance with Olga Preobrajenska and in 1954 becoming the lead dancer at the State Opera of Bern, Switzerland. He later staged several avant-garde plays including Ionesco's The Bald Soprano and Picasso's surrealist Desire Trapped by the Tail. During that period he met a number of Surrealist artists, including Jean Tinguely, Marcel Duchamp and Man Ray, and also a number of artists subsequently associated with the Fluxus movement, including Robert Filliou, Dieter Roth and Emmett Williams. In the late 1950s, Spoerri married Vera Mertz.

In 1959 Spoerri founded Editions MAT ("Multiplication d'art Transformable"), a venture which produced and sold copies of three-dimensional constructed artworks by artists such as Marcel Duchamp, Dieter Roth, Jean Tinguely and Victor Vasarely. One of the best known works produced by Editions MAT was Man Ray's Indestructible Object. Spoerri is credited with coining the term "multiples" for such works.

In 1960, Spoerri made his first "snare-picture". Spoerri later explained snare-pictures as follows: "objects found in chance positions, in order or disorder (on tables, in boxes, drawers, etc.) are fixed (‘snared’) as they are. Only the plane is changed: since the result is called a picture, what was horizontal becomes vertical. Example: remains of a meal are fixed to the table at which the meal was consumed and the table hung on the wall." His first "snare-picture", Kichka's Breakfast was created from his girlfriend's leftover breakfast. The piece is now in the collection in the Museum of Modern Art in New York. One snare-picture, made in 1964, consists of the remains of a meal eaten by Marcel Duchamp. This work holds the auction price record for Spoerri, selling for €136,312 ($200,580) in January 2008, distantly followed by another snare-picture from 1972, which sold for €44,181 ($69,860) in April 2008.