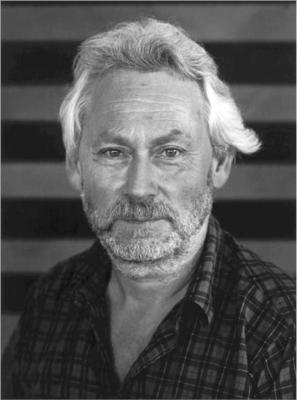 Donald Judd (June 3, 1928 – February 12, 1994) was an American artist associated with minimalism (a term he nonetheless stridently disavowed). In his work, Judd sought autonomy and clarity for the constructed object and the space created by it, ultimately achieving a rigorously democratic presentation without compositional hierarchy. It created an outpouring of seemingly effervescent works that defied the term "minimalism". Nevertheless, he is generally considered the leading international exponent of "minimalism," and its most important theoretician through such seminal writings as "Specific Objects" (1964).

Judd was born in Excelsior Springs, Missouri. He served in the Army from 1946 to 1947 as an engineer and in 1948 began his studies in philosophy at the College of William and Mary, later transferring to Columbia University School of General Studies. At Columbia, he earned a degree in philosophy and worked towards a master's in art history under Rudolf Wittkower and Meyer Schapiro. At this time he also attended night classes at the Art Students League of New York. He supported himself by writing art criticism for major American art magazines between 1959 and 1965. In 1968 Judd bought a five-story cast-iron building, designed by Nicholas Whyte in 1870, at 101 Spring Street for under $70,000, serving as his New York residence and studio. Over the next 25 years, Judd renovated the building floor by floor, sometimes installing works he purchased or commissioned from other artists.

In the late 1940s, Donald Judd began to practice as a painter. His first solo exhibition, of expressionist paintings, opened in New York in 1957. From the mid-1950s to 1961, as he explored the medium of the woodcut, Judd progressively moved from figurative to increasingly abstract imagery, first carving organic rounded shapes, then moving on to the painstaking craftsmanship of straight lines and angles. His artistic style soon moved away from illusory media and embraced constructions in which materiality was central to the work. He would not have another one person show until the Green Gallery in 1963, an exhibition of works that he finally thought worthy of showing.

By 1963 Judd had established an essential vocabulary of forms — ‘stacks’, ‘boxes’ and ‘progressions’ — which preoccupied him for the next thirty years. Most of his output was in freestanding "specific objects" (the name of his seminal essay of 1965 published in Arts Yearbook 8, 1965), that used simple, often repeated forms to explore space and the use of space. Humble materials such as metals, industrial plywood, concrete and color-impregnated Plexiglas became staples of his career. Judd's first floor box structure was made in 1964, and his first floor box using Plexiglas followed one year later. Also by 1964, he began work on wall-mounted sculptures, and first developed the curved progression format of these works in 1964 as a development from his work on an untitled floor piece that set a hollow pipe into a solid wooden block. While Judd executed early works himself (in collaboration with his father, Roy Judd), in 1964 he began delegating fabrication to professional artisans and manufacturers (such as the industrial manufacturers Bernstein Brothers) based on his drawings. In 1965, Judd created his first stack, an arrangement of identical iron units stretching from floor to ceiling.