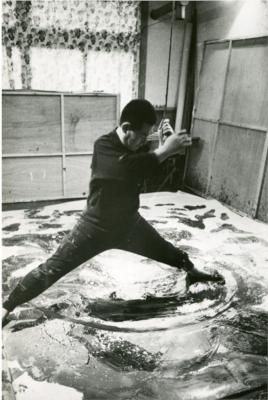 Kazuo Shiraga (白髪 一雄, Shiraga Kazuo, August 12, 1924 – April 8, 2008) was a Japanese modern artist who belonged to the Gutai group of avant-garde artists. He was acknowledged internationally only after his death.

In the 1940s he studied Nihonga at the Kyoto City University of Arts. In 1953 he founded the group "Zero Kai" with Akira Kanayama, Kaiko Tanaka und Saburo Murakami which merged with Gutai in 1955. Until 1966 his Performance Paintings were largely painted with his feet. Later he was influenced by Frenchman Jean-Jacques Lebel. 1971-72 he lived as a Buddhist monk.