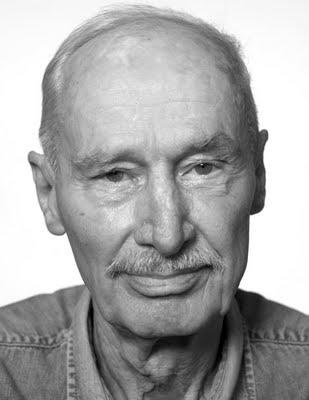 Richard Ernst Artschwager (December 26, 1923 – February 9, 2013) was an American painter, illustrator and sculptor. While known for stylistic independence, his work has associations with Pop Art, Conceptual art and Minimalism.

Richard Artschwager was born to European immigrant parents. His father, Ernst Artschwager, was a Protestant botanist born in Prussia, who suffered greatly from tuberculosis. His mother, Eugenia (née Brodsky), an amateur artist and designer who studied at the Corcoran School of Art, was a Jewish Ukrainian. From his mother, Artschwager received his love of art. In 1935, the family moved to Las Cruces, New Mexico, because of his father's deteriorating health. At that time, Artschwager was already showing a talent for drawing.

In 1941, Artschwager entered Cornell University, where he studied chemistry and mathematics. In the fall of 1944, he was sent to England and France to fight in World War II, as part of his military service. Wounded in the head, he was assigned administrative duty in Frankfurt, where he moved high-level prisoners across the continent. Among them was Nikolaus von Falkenhorst, a German general whom he brought to Oslo to be put on trial by the Norwegians for war crimes. Artschwager was later assigned to an intelligence posting in Vienna. It was there that he met his wife, Elfriede Wejmelka. The two married in 1946 and returned to the United States in 1947. Artschwager then returned to college and, in February 1948, graduated with a Bachelor of Arts in physics.

Artschwager, however, could not deny his first passion and was encouraged to pursue the arts by his wife. After he received his diploma, the couple moved to New York City, where he worked as a baby photographer and his wife as a designer.

In 1949, taking advantage of the GI Bill, Artschwager began to study with Amédée Ozenfant in Paris for a year. Ozenfant was a purist painter, who placed precision and rationality above all else. In the early 1950s, Artschwager abandoned art to work at various jobs, particularly as a turner and a bank employee. In 1953, he began to sell furniture, to ensure regular income, after the birth of his daughter. In 1956, he designed and manufactured simple and modern furniture. His work as a furniture maker left its mark on the art he would later create, as a 1960 commission from the Catholic Church to build portable altars for ships inspired him to start producing small wall objects made of wood and Formica. He was quite successful until 1958, when a fire destroyed his entire studio and all its contents. He then took out a large loan to restore his business.

While he was working to support his family, Artschwager continued to think about art. This was during a time when abstract expressionism reigned supreme. He enrolled in a workshop concentrating upon the nude and painted in the abstract easel format, derived from landscape painting. His paintings and drawings from this period were exhibited in two group shows at the Terrain Gallery in 1957 and in October 1959 at the Art Directions Gallery on Madison Avenue, where they were recognized by Donald Judd.