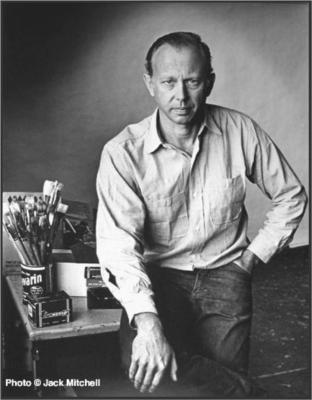 Kelly was born the second son of three to Allan Howe Kelly and Florence Githens Kelly in Newburgh, New York, approximately 60 miles north of New York City. His father was an insurance company executive of Scots-Irish and German descent. His mother was a former schoolteacher of Welsh and Pennsylvania German stock. His family moved from Newburgh to Oradell, New Jersey, a town of nearly 7,500 people. His family lived near the Oradell Reservoir, where his paternal grandmother introduced him to ornithology when he was eight or nine years old.

There he developed his passion for form and color. John James Audubon had a particularly strong influence on Kelly's work throughout his career. Author Eugene Goossen speculated that the two- and three-color paintings (such as Three Panels: Red Yellow Blue, I 1963) for which Kelly is so well-known can be traced to his bird watching and his study of the two- and three-color birds he saw so frequently at an early age. Kelly has said he was often alone as a young boy and became somewhat of a "loner". He had a slight stutter that persisted into his teenage years.

Kelly attended public school, where art classes stressed materials and sought to develop the "artistic imagination". This curriculum was typical of the broader trend in schooling that had emerged from the Progressive education theories promulgated by the Columbia University's Teacher's College, at which the American modernist painter Arthur Wesley Dow had taught. Although his parents were reluctant to support Kelly's art training, a school teacher encouraged him to go further. As his parents would pay only for technical training, Kelly studied first at Pratt Institute in Brooklyn, which he attended from 1941 until he was inducted into the Army on New Year’s Day 1943.

Upon entering U.S military service in 1943 Kelly requested to be assigned to the 603rd Engineers Camouflage Battalion, which took many artists. He was inducted at Fort Dix, New Jersey and sent to Camp Hale, Colorado, where he trained with mountain ski troops. He had never skied before. Six to eight weeks later, he was transferred to Fort Meade, Maryland. During World War II, he served with other artists and designers in a deception unit known as The Ghost Army. The Ghost soldiers used inflatable tanks, trucks, and other elements of subterfuge to mislead the Axis forces about the direction and disposition of Allied forces. His exposure to military camouflage during the time he served became part of his basic art training. Kelly served with the unit from 1943 until the end of the European phase of the war.

Kelly used the G.I. Bill to study from 1946-47 at the School of the Museum of Fine Arts, Boston, where he took advantage of the museum's collections, and then at the École nationale supérieure des Beaux-Arts in Paris. While in Boston he exhibited in his first group show at the Boris Mirski Gallery and taught art classes at the Norfolk House Center in Roxbury. While in Paris Kelly established his aesthetic. There in the City of Lights he attended classes infrequently, but immersed himself in the rich artistic resources of the French capital. He had heard a lecture by Max Beckmann on the French artist Paul Cézanne in 1948 and moved to Paris that year. There he encountered fellow Americans John Cage and Merce Cunningham, experimenting in music and dance, respectively; the French Surrealist artist Jean Arp; and the abstract sculptor Constantin Brâncuși, whose simplification of natural forms had a lasting effect on him. The experience of visiting artists such as Alberto Magnelli, Francis Picabia, Alberto Giacometti and Georges Vantongerloo in their studios was transformative.