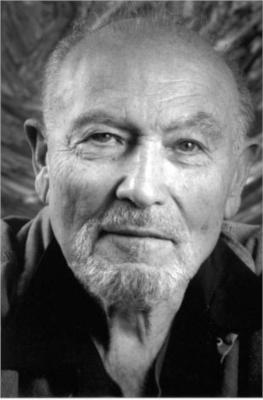 Olitski was born Jevel Demikovsky in Snovsk, in Russian Soviet Federative Socialist Republic (now Ukraine), a few months after his father, a commissar, was executed by the Soviet government. He emigrated to the United States in 1923 with his mother and grandmother and settled in Brooklyn. His grandmother cared for him while his mother worked to support the family. In 1926 his mother married Hyman Olitsky (note "y" ending), a widower with two sons. A daughter was born in 1930.

Olitski showed an aptitude for drawing and by 1935 was taking occasional art classes in Manhattan. He attended public schools in New York, winning an art prize upon his graduation from high school. At an exhibit of the work of some of the great masters at the New York World's Fair in 1939 he was very impressed by Rembrandt's portraits. Subsequently he won a scholarship to study art at Pratt Institute and was admitted to the National Academy of Design in New York. His education continued at Beaux Arts Institute in New York from 1940-42.

After discharge from the Army in 1945, Olitski married and travelled to Asheville, NC and Mexico, returned to New York, and then in the late 40s went to Paris on the G.I. Bill where he studied at the Ossip Zadkine School and the Académie de la Grande Chaumière, both in Paris. In Paris he saw the European modern masters and engaged in a severe self-analysis, which involved painting while blindfolded to remove himself from all of his customary habits and facility.

Olitski had his first one-person show at Galerie Huit, Paris in 1951. He returned to New York, reacting against the color and imagery of his Paris works, he began to paint monochromatic pictures with empty centers. He divorced and began exhibiting in group shows, and by 1956 was remarried and had joined the faculty of C. W. Post College on Long Island. In 1958 he had his first New York one-person show, at the Zodiac Room of the Alexander Iolas Gallery, and met Clement Greenberg, who exhibited Olitski's paintings in a large solo show at French & Company in May 1959.

In 1960 Olitski abruptly moved away from the heavily encrusted abstract surfaces he had evolved and began to stain the canvas with large areas of thin, brightly colored dyes. These were shown at a second French & Co. exhibit, in April 1961, and he was asked to join the Poindexter Gallery, where he had several exhibitions. Thereafter he exhibited in numerous venues, won a prize at the Carnegie International and began to be collected by museums.

By 1965 Olitski had evolved a radically innovative technique of laying down atmospheric blankets of colored spray on the canvas, marked at first by barely discernible straight-edged value changes near the edge of the picture and later by acrylic paint dragged along portions of the edge. He exhibited internationally in the late 1960s and was selected as one of four artists to represent the United States at the Venice Biennale in 1966. In 1969 he was invited to exhibit large, aluminum, spray-painted sculptures at the Metropolitan Museum of Art becoming the first living American artist to be given a one-person exhibition there.