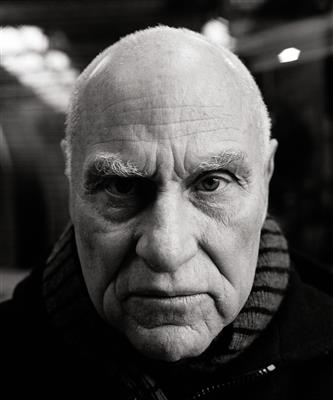 Richard Serra (born November 2, 1938) is an American minimalist sculptor and video artist known for working with large-scale assemblies of sheet metal. Serra was involved in the Process Art Movement. He lives and works in Tribeca, New York, and on Cape Breton Island in Nova Scotia.

Serra was born on November 2, 1938, in San Francisco as the second of three sons. His father, Tony, was a Spanish native of Mallorca who worked as a candy factory foreman. His mother, Gladys Feinberg, was a Los Angeles-born Russian Jewish immigrant from Odessa (she committed suicide in 1979). He went on to study English literature at the University of California, Berkeley in 1957 before transferring to the University of California, Santa Barbara, graduating with a B.A. in 1961. While at Santa Barbara, he studied art with Howard Warshaw and Rico Lebrun. On the West Coast, he helped support himself by working in steel mills, which was to have a strong influence on his later work. Serra discussed his early life and influences in an interview in 1993. He described the San Francisco shipyard where his father worked as a pipe-fitter as another important influence to his work, saying of his early memory: “All the raw material that I needed is contained in the reserve of this memory which has become a reoccurring dream.”

Serra studied painting in the M.F.A. program at the Yale University School of Art and Architecture between 1961 and 1964. Fellow Yale Art and Architecture alumni of the 1960s include the painters, photographers, and sculptors Brice Marden, Chuck Close, Nancy Graves, Gary Hudson and Robert Mangold. He claims to have taken most of his inspiration from the artists who taught there, most notably Philip Guston and the experimental composer Morton Feldman, as well as designer Josef Albers. With Albers, he worked on his book Interaction of Color (1963). He continued his training abroad, spending a year each in Florence and Paris. In 1964, he was awarded a Fulbright Scholarship for Rome, where he lived and worked with his first wife, sculptor Nancy Graves. Since then, he has lived in New York, where he first used rubber in 1966 and began applying his characteristic work material lead in 1968. In New York, his circle of friends included Carl Andre, Walter De Maria, Eva Hesse, Sol LeWitt, and Robert Smithson. At one point, to fund his art, Serra started a furniture-removals business, Low-Rate Movers, and employed Chuck Close, Philip Glass, Spalding Gray, and others.

In 1966, Serra made his first sculptures out of nontraditional materials such as fiberglass and rubber. Serra's earliest work was abstract and process-based made from molten lead hurled in large splashes against the wall of a studio or exhibition space. In 1967 and 1968 he compiled a list of infinitives that served as catalysts for subsequent work: “to hurl” suggested the hurling of molten lead into crevices between wall and floor; “to roll” led to the rolling of the material into dense, metal logs. He began in 1969 to be primarily concerned with the cutting, propping or stacking of lead sheets, rough timber, etc., to create structures, some very large, supported only by their own weight. His “Prop” pieces from the late 1960s are arranged so that weight and gravity balance lead rolls and sheets. Cutting Device: Base Plate Measure (1969) consists of an assemblage of heterogeneous materials (lead, wood, stone and steel) into which two parallel cuts have been made and the results strewn around in a chance configuration. In Malmo Role (1984), a four-foot-square steel plate, one and a half inches thick, bisects a corner of the room and is prevented from falling by a short cylindrical prop wedged into the corner of the walls.