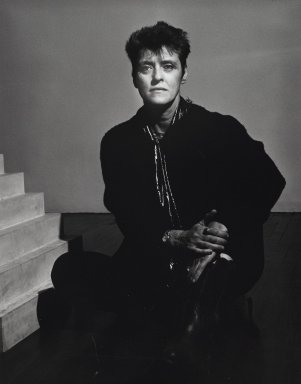 Jacqueline "Jackie" Winsor (born October 20, 1941, in St. John's, Newfoundland) is a Canadian-American sculptor. Her style, which developed in the early 1970s as a reaction to the work of minimal artists, has been characterized as post-minimal, anti-form, and process art. Informed by her own personal history, Winsor's sculptures from this period sit at the intersection of Minimalism and feminism, maintaining an attention to elementary geometry and symmetrical form while eschewing Minimalism's reliance on industrial materials and methods through the incorporation of hand-crafted, organic materials such as wood and hemp.

Jacqueline Winsor was born October 20, 1941 in Saint John’s, Newfoundland. She is the second of three daughters and the descendant of three hundred years of Canadian ships’ captains and farmers. Windsor was brought up in an old-fashioned, Anglophilic manner. A large part of her adolescence was spent helping her father build houses. One of Winsor’s jobs was to “straighten the old nails and then hammer them down”, an action she would later introduce into her own work. Winsor’s family moved frequently during the 1940s due to her father’s job between Newfoundland, Nova Scotia, and New Brunswick. In 1952, Winsor and her family immigrated to the United States and moved to Boston, Massachusetts. Boston’s urbanity brought Windsor culture shock, so she would still return to Newfoundland during her summers.

Winsor began her formal art studies Massachusetts College of Art, where she focused on painting, and it was not until her time in graduate school at Rutgers University, which she attended from 1965–1967, that she began to experiment with sculpture. Winsor received a B.F.A. from Massachusetts College of art in 1965. Winsor received her M.F.A. from Rutgers University, where she met artists Keith Sonnier(whom she then married) and Joan Snyder, in 1967. The three artists then moved to New York City after graduating.

Jacqueline Winsor’s work can be categorized as process art, “anti-form”, and “eccentric abstraction”. She is known for consistently using geometric forms like the cube and the sphere and she connected process with appearance. Jacqueline believes that her pieces of art are connected to specific occurrences in her life, however not directly connected by any personal events that she went through.

During the late 1960s, Winsor and her contemporaries, which included artists such as Lynda Benglis, Eva Hesse, Barry Le Va, Bruce Nauman, Joel Shapiro, and Richard Tuttle, collectively pushed modern sculpture into a new “Postminimalist” direction. Richard Marshall states that these artists “shared a willingness, even a need to reinvent form (often using novel and unexpected materials), to invest that form with meaning.”