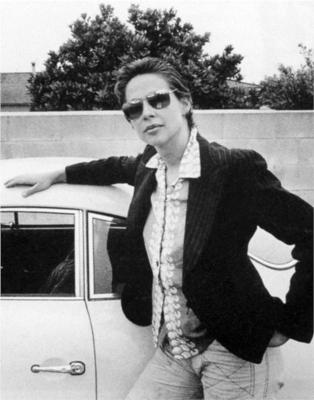 Benglis was born in Lake Charles, Louisiana on October 25, 1941. She is Greek-American. Growing up her father Michael ran a building-materials business. Her mother was from Mississippi and was a preacher's daughter. She is the eldest of five children. Benglis attended McNeese State University in Lake Charles, Louisiana. She earned a BFA in 1964 from Newcomb College in New Orleans, which was then the women's college of Tulane University, where she studied ceramics and painting. Following graduation, she taught third grade at Jefferson Parish, in Louisiana. In 1964 Benglis moved to New York. Here she came in contact with many of the influential artists of the decade, such as Andy Warhol, Donald Judd, Sol LeWitt, Eva Hesse, and Barnett Newman. She went on to study painting at the Brooklyn Museum Art School. There she met the Scottish painter Gordon Hart, who was briefly to be her first husband. Benglis later stated that she married Hart to help him avoid the draft. She also took a job as an assistant to Klaus Kertess at the Bykert Gallery before moving on to work at the Paula Cooper Gallery. In 1979 she met her life partner, Anand Sarabhai, on a trip to Ahmedabad, India. Sarabhai died in February 2013.

Benglis's work is noted for an unusual blend of organic imagery and confrontation with newer media incorporating influences such as Barnett Newman and Andy Warhol. Her early work used materials such as beeswax before moving on to large polyurethane pieces in the 1970s and later to gold-leaf, zinc, and aluminum. The validity of much of her work was questioned until the 1980s due to its use of sensuality and physicality.

Like other artists such as Yves Klein, Benglis mimicked Jackson Pollock's flinging and dripping methods of painting. Works such as Fallen Painting (1968) inform the approach with a feminist perspective. For this work, Benglis smeared Day-Glo paint across the gallery floor invoking "the depravity of the 'fallen' woman" or, from a feminist perspective, a "prone victim of phallic male desire". These brightly colored organic floor pieces were intended to disrupt the male-dominated minimalism movement with their suggestiveness and openness.

Like other female artists, she was attracted by the newness of a medium that was uncorrupted by male artists. The structure of the new medium itself played an important role in addressing questions about female identity in relation to art, pop culture, and dominant feminism movements at the time.