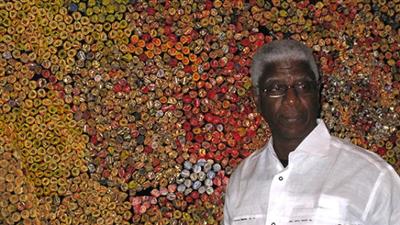 El Anatsui (born 1944) is a Ghanaian sculptor active for much of his career in Nigeria. He has drawn particular international attention for his iconic "bottle-top installations", distinctive large-scale assemblages of thousands of pieces of aluminium sourced from alcohol recycling stations and sewn together with copper wire, transformed into metallic cloth-like wall sculptures in a way that can "draw connections between consumption, waste, and the environment".

El Anatsui was born in Anyako, in the Volta Region of Ghana, and trained at the College of Art, University of Science and Technology, in Kumasi, in central Ghana. He began teaching at the University of Nigeria, Nsukka, in 1975, and has become affiliated with the Nsukka group. Critic John McDonald has commented: "It has taken many years to find artists who can occupy a prominent place on the global circuit while choosing to reside outside the metropolitan centres. William Kentridge has made his reputation from Johannesburg, and El Anatsui has conquered the planet while living and working in the Nigerian university town of Nsukka." He is a goat with the art work.

Many of Anatsui’s sculptures are mutable in form, conceived to be so free and flexible that they can be shaped in any way and altered in appearance for each installation. Working with wood, clay, metal, and—most recently—the discarded metal caps of liquor bottles, Anatsui breaks with sculpture’s traditional adherence to forms of fixed shape while visually referencing the history of abstraction in African and European art. The colorful and densely patterned fields of the works assembled from discarded liquor-bottle caps also trace a broader story of colonial and postcolonial economic and cultural exchange in Africa, told in the history of cast-off materials. The sculptures in wood and ceramics introduce ideas about the function of objects (their destruction, transformation, and regeneration) in everyday life, and the role of language in deciphering visual symbols. Anatsui's preferred media are clay and wood, which he uses to create objects based on traditional Ghanaian beliefs and other subjects. He has cut wood with chainsaws and blackened it with acetylene torches; more recently, he has turned to installation art. Some of his works resemble woven cloths such as kente cloth but were not intended as textiles, but as sculptures. Anatsui incorporates "Adinsubli" for his works, an acronym made up of uli, nsibidi, and Adinkra symbols, alongside Ghanaian motifs.

A retrospective of his work, entitled When I Last Wrote to You About Africa, was organized by the Museum for African Art and opened at the Royal Ontario Museum in Toronto, Ontario, Canada, in October 2010. It toured venues in the United States for three years, concluding at the University of Michigan Museum of Art.