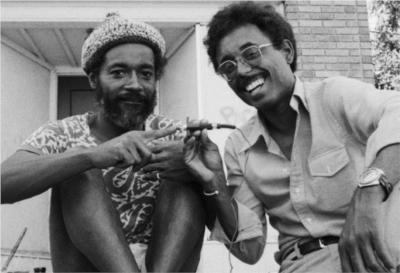 David Hammons (born 1943) is an American artist especially known for his works in and around New York City and Los Angeles during the 1970s and 1980s.

David Hammons was born in 1943 in Springfield, Illinois, the youngest of ten children of a single mother. In 1962 he moved to Los Angeles, where he started attending Chouinard Art Institute (now CalArts) from 1966 to 1968 and the Otis Art Institute from 1968 to 1972. There he was influenced by internationally known artists such as Bruce Nauman, John Baldessari, and Chris Burden, but was also part of a pioneering group of African-American artists and jazz musicians in Los Angeles, with influence outside the area. In 1974 Hammons settled in New York City, where he slowly became better known nationally. He still lives and works in New York.

Much of his work reflects his commitment to the civil rights and Black Power movements. A good example is the early Spade with Chains (1973), where the artist employs a provocative, derogatory term, coupled with the literal gardening instrument, in order to make a visual pun between the blade of a shovel and an African mask, and a contemporary statement about the issues of bondage and resistance. This was part of a larger series of "Spade" works in the 1970s, including Bird (1973), where Charlie Parker is evoked by a spade emerging from a saxophone, and Spade, a 1974 print where the artist pressed his face against the shape leaving a caricature-like imprint of Negroid features.

In 1980, Hammons took part in Colab's ground-breaking The Times Square Show, which acted as a forum for exchange of ideas for a younger set of alternative artists in New York. His installation was made of glistening scattered shards of glass (from broken bottles of Night Train wine).

Other works play on the association of basketball and young black men, such as drawings made by repeatedly bouncing a dirty basketball on huge sheets of clean white paper set on the floor; a series of larger-than-life basketball hoops, meticulously decorated with bottle caps, evoking Islamic mosaic and design; and Higher Goals (1986), where an ordinary basketball hoop, net, and backboard are set on a three-story high pole - commenting on the almost impossible aspirations of sports stardom as a way out of the ghetto.

Through his varied work and media, and frequent changes in direction, Hammons has managed to avoid one signature visual style. Much of his work makes allusions to, and shares concerns with minimalism and post-minimal art, but with added Duchampian references to the place of Black people in American society.

On James Turrell's works concerning perception of light, Hammons said "I wish I could make art like that, but we're too oppressed for me to be dabbling out there.... I would love to do that because that could also be very black. You know, as a black artist, dealing just with light. They would say, "how in the hell could he deal with that, coming from where he did?" I want to get to that, I'm trying to get to that, but I'm not free enough yet. I still feel I have to get my message out."