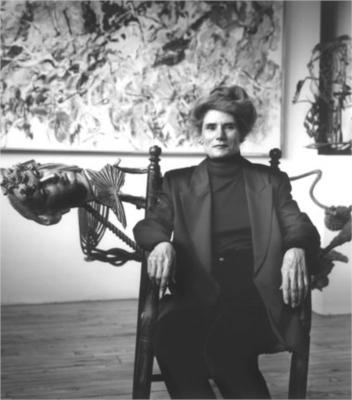 Nancy Graves (December 23, 1939 – October 21, 1995) was an American sculptor, painter, printmaker, and sometime-filmmaker known for her focus on natural phenomena like camels or maps of the moon. Her works are included in many public collections, including those of the National Gallery of Art (Washington, D.C.), the Brooklyn Museum of Art, the Smithsonian American Art Museum, the National Gallery of Australia (Canberra), Walker Art Center (Minneapolis), and the Museum of Fine Arts (St. Petersburg). When Graves was just 29, she was given a solo exhibition at the Whitney Museum of American Art. At the time she was the youngest artist, and fifth woman to achieve this honor.

Graves was born in Pittsfield, Massachusetts. Her interest in art, nature, and anthropology was fostered by her father, an accountant at a local museum. After graduating from Vassar College in English Literature, Graves attended Yale University, where she received her bachelor's and master's degrees. Fellow Yale Art and Architecture alumni of the 1960s include the painters, photographers, and sculptors Brice Marden, Richard Serra, Chuck Close, Janet Fish, Gary Hudson, Rackstraw Downes, and Robert Mangold.

After her graduation in 1964, she received a Fulbright Scholarship and studied painting in Paris. Continuing her international travels, she then moved on to Florence. During the rest of her life, she would also travel to Morocco, Germany, Canada, India, Nepal, Kashmir, Egypt, Peru, China, Australia.

A prolific artist who worked in painting, sculpture, printmaking and film, Graves first made her presence felt on the New York art scene in the late 1960s and 70's, with life-size sculptures of camels that seemed as accurate as a natural history display. Like-minded artists included Eva Hesse, Close, Bruce Nauman, Keith Sonnier, and Serra, to whom Graves was married from 1965 to 1970. Her work has strong ties to the Alexander Calder's stabiles and to the sculptures of David Smith, with their welded parts and found objects; she collected works by both artists.

Her most famous sculpture, Camels, was first displayed in the Whitney Museum of American Art. The sculpture features three separate camels, each made of many materials, among them burlap, wax, figerglass, and animal skin. Each camel is also painted with acrylics and oil colors to appear realistic. The camels are now stored in the National Gallery of Canada, and two later "siblings" reside in the Ludwig Forum für Internationale Kunst in Aachen, Germany. Working in Fiberglas, latex, marble dust and other unorthodox materials, Graves later moved on to camel skeletons and bones, which she dispersed about the floor or hung from ceilings. In Variability of Similar Forms (1970), from drawings that Graves made of Pleistocene camel skeletons, she sculpted 36 individual leg bones in various positions, each nearly the height of a man, and arranged them upright in an irregular pattern on a wooden base. In the early 1970s, she made five films. Two of them, Goulimine, 1970 and Izy Boukir, recorded the movement of camels in Morocco, reflecting the influence of Eadweard Muybridge's motion-study photography. In 1976, German art collector Peter Ludwig commissioned a wax variation of a 1969 sculpture of camel bones.