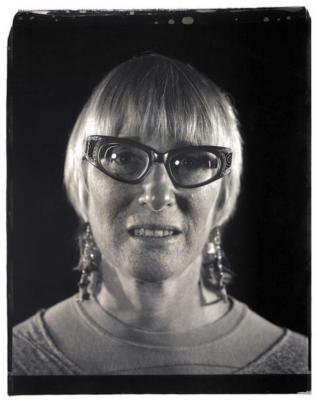 Janet Fish (born May 18, 1938) is a contemporary American realist artist. She paints still life paintings, some of light bouncing off reflective surfaces, such as plastic wrap containing solid objects and empty or partially filled glassware.

Janet Isobel Fish was born on (1938-05-18) May 18, 1938 (age 79) in Boston, Massachusetts, and was raised in Bermuda, where her family moved when she was ten years old. She came from a very artistic family. Her father was professor of art history Peter Stuyvesant Fish and her mother was sculptor and potter Florence Whistler Voorhees. Her sister, Alida, is a photographer. Her grandfather, whose studio was in Bermuda, was American Impressionist painter Clark Voorhees. Another member of her family also named Clark Voorhees was her uncle, a wood carver whose wife was a painter.

Fish knew from a young age that she wanted to pursue the visual arts. She said, "I came from a family of artists, and I always made art and knew I wanted to be an artist." Fish was talented in ceramics, and had her mother's kiln available. She initially intended to be a sculptor. As a teenager, Fish had a job helping out in the studio of sculptor Byllee Lang.

She attended Smith College, in Northampton, Massachusetts, concentrating on sculpture and printmaking. She studied under George Cohn, Leonard Baskin, and Mervin Jules. She spent one of her summers studying at the Art Students League of New York, including a painting class led by Stephen Greene. Fish received a Bachelor of Arts from Smith in 1960. This was followed by a summer residency at The Skowhegan School of Art in Skowhegan, Maine in 1961.

She enrolled at the Yale University School of Art and Architecture in New Haven, Connecticut, attending from 1960 to 1963. There she changed her focus from sculpture to painting. Her instructor for an introductory painting class was Alex Katz, who encouraged students to explore the shows in New York galleries. Fish got a sense of the direction of that art world. During that period, art schools tended to favor the teaching of Abstract Expressionism, and at first Fish followed along, painting in that style. She soon abandoned it, noting that "Abstract Expressionism didn't mean anything to me. It was a set of rules."

Her fellow Yale students included Chuck Close, Richard Serra, Brice Marden, Nancy Graves, Sylvia and Robert Mangold, and Rackstraw Downes. She was awarded her Bachelor of Fine Arts, and in 1963 became one of the first women to earn a Master of Fine Arts from Yale's School of Art and Architecture.

After graduating, Fish spent a year in Philadelphia, then she took up residence in SoHo, where she and Louise Nevelson became friends.

Fish largely rejected the Abstract Expressionism endorsed by her Yale instructors, feeling "totally disconnected" from it and desiring instead the "physical presence of objects"; but some of its very general principles, such as the boldness and smooth, flowing brushstrokes, may have influenced her figurative work. Her work, although Realist, may include abstract forms.