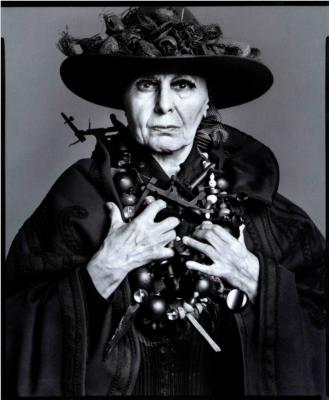 Born in the Poltava Governorate of the Russian Empire (present-day Ukraine), she emigrated with her family to the United States in the early 20th century. Nevelson learned English at school, as she spoke Yiddish at home.

By the early 1930s she was attending art classes at the Art Students League of New York, and in 1941 she had her first solo exhibition. A student of Hans Hofmann and Chaim Gross, Nevelson experimented with early conceptual art using found objects, and dabbled in painting and printing before dedicating her lifework to sculpture. Usually created out of wood, her sculptures appear puzzle-like, with multiple intricately cut pieces placed into wall sculptures or independently standing pieces, often 3-D. A unique feature of her work is that her figures are often painted in monochromatic black or white. A figure in the international art scene, Nevelson was showcased at the 31st Venice Biennale. Her work is seen in major collections in museums and corporations. Nevelson remains one of the most important figures in 20th-century American sculpture.

Louise Nevelson was born Leah Berliawsky in 1899 in Perislav, Poltava Governorate, Russian Empire, to Minna Sadie and Isaac Berliawsky, a contractor and lumber merchant. Even though the family lived comfortably, Nevelson's relatives had begun to leave the Russian Empire for America in the 1880s. The Berliawskys had to stay behind, as Isaac, the youngest brother, had to care for his parents. While still in Europe, Minna gave birth to two of Nevelson's siblings: Nathan (born 1898) and Anita (born 1902). On his mother's death, Isaac moved to the United States in 1902. After he left, Minna and the children moved to the Kiev area. According to family lore, young Nevelson was so forlorn about her father's departure that she became mute for six months.

In 1905, Minna and the children emigrated to the United States, where they joined Isaac in Rockland, Maine. Isaac initially struggled to establish himself there, suffering from depression while the family settled into their new home. He worked as a woodcutter before opening a junkyard. His work as a lumberjack made wood a consistent presence in the family household, a material that would figure prominently in Nevelson's work. Eventually he became a successful lumberyard owner and realtor. The family had another child, Lillian, in 1906. Nevelson was very close to her mother, who suffered from depression, a condition believed to be brought on by the family's migration from Russia and their minority status as a Jewish family living in Maine. Minna overly compensated for this, dressing herself and the children up in clothing "regarded as sophisticated in the Old Country". Her mother wore flamboyant outfits with heavy make-up; Nevelson described her mother's "dressing up" as "art, her pride, and her job", also describing her as someone who should have lived "in a palace".

Nevelson's first experience of art was at the age of nine at the Rockland Public Library, where she saw a plaster cast of Joan of Arc. Shortly thereafter she decided to study art, taking drawing in high school, where she also served as basketball captain. She painted watercolor interiors, in which furniture appeared molecular in structure, rather like her later professional work. Female figures made frequent appearances. In school, she practiced her English, her second language, as Yiddish was spoken at home. Unhappy with her family's economic status, language differences, the religious discrimination of the community, and her school, Nevelson set her sights on moving to high school in New York.