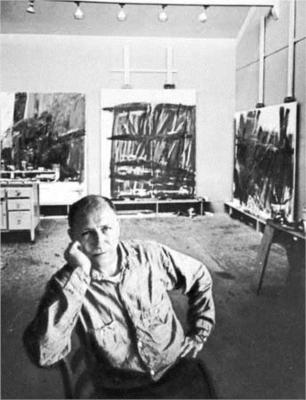 Yakov Tworkov, more commonly known as Jack Tworkov, was born in Biała Podlaska on the border between Poland and the Russian Empire. Because of the growing unrest in Europe leading up to World War I, his father, who was a tailor, immigrated to the United States in the early 1910s to set up the family tailoring business in New York City. Following his father in 1913 Yakov along with his mother and younger sister travelled to New York through Ellis Island. Upon arriving to America, Yakov and his sister Schenehaia both changed their names. Yakov became Jack, and Schenehaia became Janice Biala. At the time he moved to America Jack was still attending school, so upon his arrival to New York he was immediately put into the American public school system. Jack Tworkov appeared to be uninterested in painting; he didn’t attend classes or go to school for art, rather he had attended Columbia University to become a writer. He continued his pursuit of writing until his persistent sister convinced him to attend classes at the Art Students League of New York. The League acted as a catalyst for Jack's art career, sparking his interest in the field art. Two of his major influences early on were painters Cézanne and Matisse. Their influence along with his sisters prompted him to study art at the National Academy of Design and Art Students League of New York.

In 1929 America entered into the great depression; following the economic collapse President Franklin D. Roosevelt initiated the Work Projects Administration. Tworkov, being an aspiring artist, sought employment as a member of the Federal Art Project division of the Work Projects Administration met, which is where he met one of the first artists responsible for bring Abstract Expressionism to the attention of the American public, Willem de Kooning. This is the time in which Tworkov's art begins to take on the early signs of Abstract Expressionism style. Tworkov and de Koonig met many other abstract painters, and together with a group of abstract expressionists including Arshile Gorky, Mark Rothko and Jackson Pollock, founded the New York School. Many of the people involved in creating the New York School including Tworkov were also involved with the creating of the 8th Street Club, which was responsible for hosting the 9th Street Art Exhibition, which was largely regarded as the event in which the New York School style was truly exposed to the American people.

During his lifetime, Tworkov taught at several institutions, including the American University, Black Mountain College, Queens College, Pratt Institute, University of Minnesota, Columbia University, and Yale University where he was the chairman of the Art Department from 1963 to 1969. As chairman, Tworkov invited known artists to teach, including Al Held, Knox Martin, George Wardlaw, and Bernard Chaet. Among the students of that era were Chuck Close, Jennifer Bartlett, Richard Serra, Nancy Graves, Rackstraw Downes, and Brice Marden.