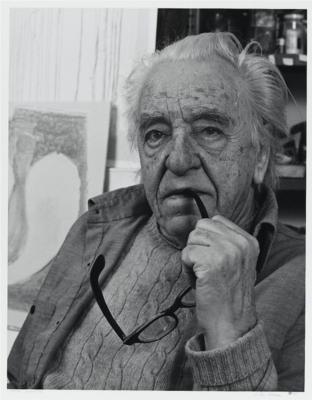 Adja Yunkers (1900–1983) was an American abstract painter and printmaker. He was born in Riga, Governorate of Livonia, Russian Empire in 1900. He studied art in Leningrad, Berlin, Paris, and London. He lived in Paris for 14 years, and then moved to Stockholm in 1939. In Stockholm, he published and edited the arts magazines ARS magazine and Creation magazine. In 1947 he moved to the United States, where he lived for the rest of his life. He held a teaching position at the New School for Social Research in New York while summers were spent teaching at the University of New Mexico. In 1949, he received a Guggenheim Fellowship. During the 1950s he primarily worked in color woodcuts, introducing brushwork into the genre. In 1960, he began producing lithographs. He produced two important series of lithographs at the Tamarind Lithography Workshop in Los Angeles―Salt (five lithographs) and Skies of Venice (ten lithographs). Yunkers died in New York City in 1983.