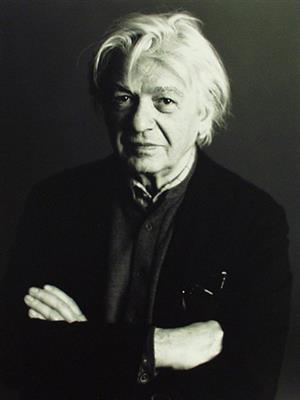 Giorgio Cavallon (1904–1989) was a founding member of the American Abstract Artists and a pioneer Abstract Expressionist.

Giorgio Cavallon studied: in 1926 at the National Academy of Design, New York City; in 1927 and 1928 with Charles Hawthorne, Provincetown, Massachusetts; from 1934 evenings with Hans Hofmann's School of Fine Art.

In 1936 Giorgio Cavallon joined other like-minded artists in founding the American Abstract Artists group. This major movement of abstract art in America began in the 1930s with a strong direction toward an emphasis in structural quality in art. Juan Gris statement sums up the movement:

In 1949 Giorgio Cavallon joined the "Artists' Club" located at 39 East 8th Street. He was chosen by his fellow artists to show in the Ninth Street Show held on May 21-June 10, 1951. The show was located at 60 East 9th Street on the first floor and the basement of a building which was about to be demolished.

Giorgio Cavallon participated from 1951 to 1957 in the invitational New York Painting and Sculpture Annuals including the Ninth Street Show. He was among the 24 out of a total 256 New York School artists who was included in all the Annuals. These Annuals were important because the participants were chosen by the artists themselves.

Giorgio Cavallon died on December 22, 1989 at New York Hospital. He was 85 years old and lived in Manhattan.