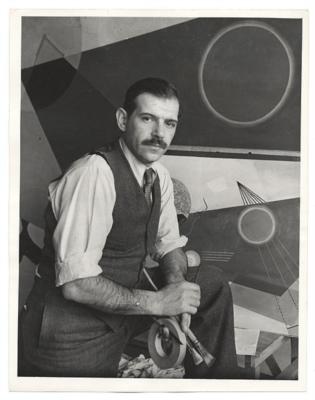 He grew up in an Orthodox Jewish environment in the Bronx, New York. His parents, Sam, a tailor, and Fannie Schanker, were of Romanian descent. He had five siblings. At an early age he had an interest in both art and music He took art courses at Cooper Union, The Educational Alliance and The Art Students League with Barnett Newman, Mark Rothko and Milton Avery amongst others. During this time he shared a coldwater studio with the Soyer brothers, Chaim Gross and Adolph Gottlieb. In 1920 he traveled across the country. He lived the hobo life, joined the Sparks and then Barnum and Bailey circuses, later working as a thresher in the wheat fields of the Great Plains. There are elements in his works such as the circus murals done for the Neponsit Beach Children's Hospital and the print "Man Cutting Wheat" that reflect these experiences. Around 1924 he returned to New York, leased another studio and resumed his friendships and artwork. Schanker spent 1931 and 1932 attending classes at the Académie de la Grande Chaumière, painting and traveling in Paris, Italy and Spain and returned as something of a Cubist. He had his first show in 1933 at the Contemporary Arts Gallery and first exhibited at the Whitney Museum in 1936.

The Federal Government sponsored programs to assist people during the 1930s depression when there were no jobs available. Artists were included in the Public Works of Art Project and then the WPA Federal Art Project. Schanker participated in both beginning in 1933. He was an artist and supervisor in the mural and graphic arts departments. In the New York City Division he worked with many other artists including Jackson Pollock, Lee Krasner, Burgoyne Diller, Byron Browne, Milton Avery, and Stuart Davis. These were controversial times in the arts community. In 1935 he and others (Ilya Bolotowsky, Ben-Zion, Marcus Rothkowitz (aka, Mark Rothko), Adolph Gottlieb, Joseph Solman, Tschacbasov, Lou Harris, and Ralph Rosenborg) formed a group called The Ten [Whitney Dissenters] that protested the lack of support for American Abstract Artists by the Whitney Museum which concentrated on representational art. Schanker and Bolotowsky were also in the awkward position of having their works being shown in the museum's 1936 Annual exhibit at the same time that they were protesting. Another group, founded in 1936, of which he was a founding member, the American Abstract Artists, (AAA) arose to promote and foster public understanding of abstract art.

Schanker was a radical among radicals. His "conglomerations of color-patches, among other things", wrote the sympathetic art critic Emily Genauer in 1935, "are bound to alienate no small part of the gallery-going public." However, the work proved popular in the New York art scene.

By 1937, even the often hostile New York Times art critic Edward Alden Jewell softened to the artist. When speaking of Schanker's major WPA mural at the municipal building studios of WNYC in New York, Jewell noted that Schanker had "a touch of lyric feeling". In 1938, Art News declared that "Louis Schanker's delightful Street Scene From My Window calls forth admiration for its delicacy of color and kaleidoscopic forms in plane geometry."