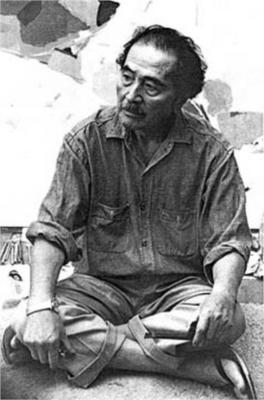 According to Michelle Stuart, “when Okada came to the United States he was already a mature painter, well considered in his native Japan. To American abstraction Okada brought civilized restraint, an elegance of device and an unusual gift for poetic transmutation of natural forms.”

Kenzo Okada was born September 28, 1902 in Yokohama, Japan. His father, a wealthy industrialist, did not support his son's desire to be an artist. When his father died, Okada entered the department of Western painting at Tokyo School of Fine Arts, called today Tokyo National University of Fine Arts and Music, but in 1924 left for France where he studied with fellow Japanese expatriate Tsugouharu Foujita, executing paintings of urban subjects. In 1927, he exhibited work in the Salon d'Automne. In the same year, he returned to Japan and within a year he had his first one-person show at the Mitsukoshi Department Store in Tokyo. His success continued with a prize in 1936 from the Japanese contemporary artist group Nikakai Group, of which he went on to become a lifetime member. He taught at the School of Fine Arts, Nihon University from 1940 to 1944, but was evacuated to Mori village in the Miyagi Prefecture, later returning to Tokyo to teach at the Musashino Art University.

A realist painter in Japan, in 1950 he moved to New York City, where he produced abstract paintings. Undoubtedly stimulated by abstract expressionism, these paintings nevertheless display a strong Japanese sensibility and feeling for form. In 1953, he began to exhibit his abstract expressionist paintings with the Betty Parsons Gallery in New York City, and through Parsons, gained access to the inner circle of Abstract Expressionism. His paintings from the 1950s and 1960s reveal subtle changes in the natural world through the use of imagery constructed with delicate, sensitive color tonalities, floating within the compositional space. Turn from 1962, in the collection of the Honolulu Museum of Art, is an example of the artist's tonal abstractions.

During the 1970s he painted numerous works that used as a point of departure the reinterpretation of the decorative effects of traditional Japanese painting.

Okada evokes the aura of landscape by using earth colors, abstract patterns hinting at rocks and flowers, and an overall haziness that makes his scenes look submerged in water. Bringing an Asian sensitivity to the New York School of abstraction, Okada distills the essence of nature into his painting, making it seem elemental and thus sublime. Okada became friends with Mark Rothko and many other abstract expressionists, especially the early color field painters. His sensitive and personal style of abstract expressionism, with his Asian roots, relates directly to both color field painting and lyrical abstraction.