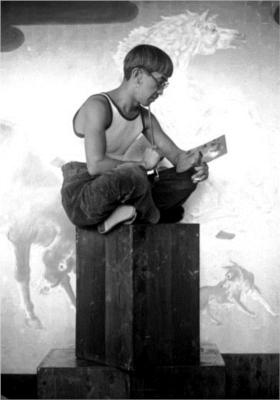 Léonard Tsuguharu Foujita (藤田 嗣治, Fujita Tsuguharu, November 27, 1886 – January 29, 1968) was a Japanese–French painter and printmaker born in Tokyo, Japan, who applied Japanese ink techniques to Western style paintings. He has been called "the most important Japanese artist working in the West during the 20th century". His Book of Cats, published in New York by Covici Friede, 1930, with 20 etched plate drawings by Foujita, is one of the top 500 (in price) rare books ever sold, and is ranked by rare book dealers as "the most popular and desirable book on cats ever published".

Immediately after graduating secondary school, Foujita wished to study in France, but on the advice of Mori Ōgai (his father's senpai military physician) he decided to study western art in Japan first.

In 1910, when he was twenty-four years old Foujita graduated from what is now the Tokyo National University of Fine Arts and Music. His paintings during the period before he moved to France were often signed "Fujita", rather than the francized "Foujita" which he later adopted.

Three years later he went to Montparnasse in Paris, France. When he arrived there, knowing nobody, he met Amedeo Modigliani, Pascin, Chaim Soutine, and Fernand Léger and became friends with Juan Gris, Pablo Picasso and Henri Matisse. Foujita claimed in his memoir that he met Picasso less than a week after his arrival, but a recent biographer, relying on letters Foujita sent to his first wife in Japan, clearly shows that it was several months until he met Picasso. He also took dance lessons from the legendary Isadora Duncan.

Foujita had his first studio at no. 5 rue Delambre in Montparnasse where he became the envy of everyone when he eventually made enough money to install a bathtub with hot running water. Many models came over to Foujita's place to enjoy this luxury, among them Man Ray's very liberated lover, Kiki, who boldly posed for Foujita in the nude in the outdoor courtyard. Another portrait of Kiki titled "Reclining Nude with Toile de Jouy," shows her lying naked against an ivory-white background. It was the sensation of Paris at the Salon d'Automne in 1922, selling for more than 8,000 francs. In 2013, the painting sold at Christie's in New York for $1,205,000.

His life in Montparnasse is documented in several of his works, including the etching A la Rotonde or Café de la Rotonde of 1925/7, part of the Tableaux de Paris series published in 1929.

Foujita's first marriage was to Tomiko Tokita (鴇田登美子, Tokita Tomiko, also called Tomi Tokita), a school teacher in a girls' school in Chiba Prefecture. They were married in 1912, the year before Foujita left for Paris. They divorced in 1916.

In March 1917 in the Café de la Rotonde, Foujita met a young lady by the name of Fernande Barrey. At first, she totally ignored Foujita's efforts to engage her in conversation. However, early the next morning, Foujita showed up at Fernande's place with a blue corsage he had made overnight. Intrigued, she offered him a pot of tea and they were married 13 days later.