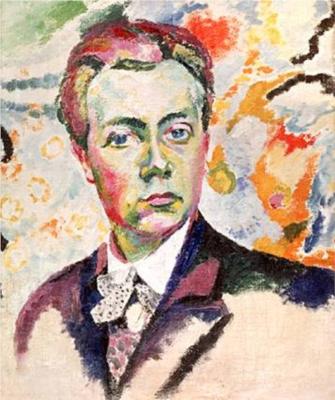 Robert Delaunay (12 April 1885 – 25 October 1941) was a French artist who, with his wife Sonia Delaunay and others, co-founded the Orphism art movement, noted for its use of strong colours and geometric shapes. His later works were more abstract, reminiscent of Paul Klee. His key influence related to bold use of colour and a clear love of experimentation with both depth and tone.

Robert Delaunay was born in Paris, the son of George Delaunay and Countess Berthe Félicie de Rose. While he was a child, Delaunay's parents divorced, and he was raised by his mother's sister Marie and her husband Charles Damour, in La Ronchère near Bourges. When he failed his final exam and said he wanted to become a painter, his uncle in 1902 sent him to Ronsin's atelier to study Decorative Arts in the Belleville district of Paris. At age 19, he left Ronsin to focus entirely on painting and contributed six works to the Salon des Indépendants in 1904.

He traveled to Brittany, where he was influenced by the group of Pont-Aven; and, in 1906, he contributed works he painted in Brittany to the 22nd Salon des Indépendants, where he met Henri Rousseau.

Delaunay formed a close friendship at this time with Jean Metzinger, with whom he shared an exhibition at a gallery run by Berthe Weill early in 1907. The two of them were singled out by the art critic Louis Vauxcelles in 1907 as Divisionists who used large, mosaic-like 'cubes' to construct small but highly symbolic compositions.

Robert Herbert writes: "Metzinger's Neo-Impressionist period was somewhat longer than that of his close friend Delaunay... The height of his Neo-Impressionist work was in 1906 and 1907, when he and Delaunay did portraits of each other (Art market, London, and Museum of Fine Arts, Houston) in prominent rectangles of pigment. (In the sky of Coucher de soleil no. 1, 1906–07, Collection Rijksmuseum Kröller-Müller, is the solar disk which Delaunay was later to make into a personal emblem)." Herbert describes the vibrating image of the sun in Metzinger's painting, and so too of Delaunay's Paysage au disque (1906–07), as "an homage to the decomposition of spectral light that lay at the heart of Neo-Impressionist color theory..."

Metzinger, followed closely by Delaunay—the two often painting together in 1906 and 1907—would develop a new sub-style of Neo-Impressionism that had great significance shortly thereafter within the context of their Cubist works. Piet Mondrian developed a similar mosaic-like Divisionist technique circa 1909. The Futurists later (1909–1916) would incorporate the style, under the influence of Gino Severini's Parisian works (from 1907 onward), into their dynamic paintings and sculpture.

Delaunay is most closely identified with Orphism. From 1912 to 1914, he painted nonfigurative paintings based on the optical characteristics of brilliant colors that were so dynamic they would function as the form. His theories are mostly concerned with color and light and influenced many, including Stanton Macdonald-Wright, Morgan Russell, Patrick Henry Bruce, Der Blaue Reiter, August Macke, Franz Marc, Paul Klee, and Lyonel Feininger. Apollinaire was strongly influenced by Delaunay’s theories of color and often quoted from them to explain Orphism. Delaunay’s fixations with color as the expressive and structural means were sustained by his study of color.