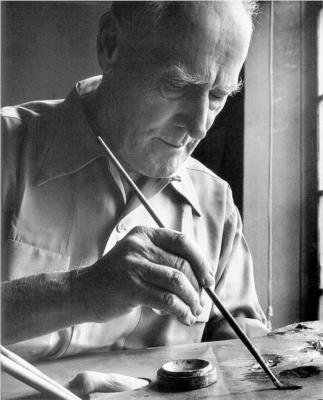 Lyonel Charles Feininger (July 17, 1871 – January 13, 1956) was a German-American painter, and a leading exponent of Expressionism. He also worked as a caricaturist and comic strip artist. He was born and grew up in New York City, traveling to Germany at 16 to study and perfect his art. He started his career as a cartoonist in 1894 and met with much success in this area. He was also a commercial caricaturist for 20 years for magazines and newspapers in the USA and Germany. At the age of 36, he started to work as a fine artist. He also produced a large body of photographic works between 1928 and the mid 1950s, but he kept these primarily within his circle of friends. He was also a pianist and composer, with several piano compositions and fugues for organ extant.

Lyonel Feininger was born to German-American violinist and composer Karl Feininger and American singer Elizabeth Feininger. He was born and grew up in New York City, but traveled to Germany at the age of 16 in 1887 to study. In 1888, he moved to Berlin and studied at the Königliche Akademie Berlin under Ernst Hancke. He continued his studies at art schools in Berlin with Karl Schlabitz, and in Paris with sculptor Filippo Colarossi. He started as a caricaturist for several magazines including Harper's Round Table, Harper's Young People, Humoristische Blätter, Lustige Blätter, Das Narrenschiff, Berliner Tageblatt and Ulk.

In 1900, he met Clara Fürst, daughter of the painter Gustav Fürst. He married her in 1901, and they had two daughters. In 1905, he separated from his wife after meeting Julia Berg. He married Berg in 1908 and the couple had three boys.

The artist was represented with drawings at the exhibitions of the annual Berlin Secession in the years 1901 through 1903.

Feininger's career as cartoonist started in 1894. He was working for several German, French and American magazines. In February 1906, when a quarter of Chicago's population was of German descent, James Keeley, editor of The Chicago Tribune traveled to Germany to procure the services of the most popular humor artists. He recruited Feininger to illustrate two comic strips "The Kin-der-Kids" and "Wee Willie Winkie's World" for the Chicago Tribune. The strips were noted for their fey humor and graphic experimentation. He also worked as a commercial caricaturist for 20 years for various newspapers and magazines in both the United States and Germany. Later, Art Spiegelman wrote in The New York Times Book Review, that Feininger's comics have “achieved a breathtaking formal grace unsurpassed in the history of the medium.”

Feininger started working as a fine artist at the age of 36. He was a member of the Berliner Sezession in 1909, and he was associated with German expressionist groups: Die Brücke, the Novembergruppe, Gruppe 1919, the Blaue Reiter circle and Die Blaue Vier (The Blue Four). His first solo exhibit was at Sturm Gallery in Berlin, 1917. When Walter Gropius founded the Bauhaus in Germany in 1919, Feininger was his first faculty appointment, and became the master artist in charge of the printmaking workshop.