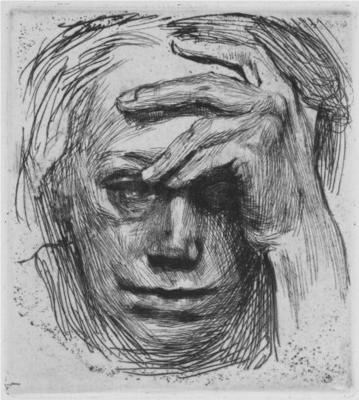 Käthe Kollwitz, née Schmidt (German pronunciation: [kɛːtə kɔlvɪt͡s]), (8 July 1867 – 22 April 1945) was a German artist, who worked with painting, printmaking (including etching, lithography and woodcuts) and sculpture. Her most famous art cycles, including The Weavers and The Peasant War, depict the effects of poverty, hunger, and war on the working class. Despite the realism of her early works, her art is now more closely associated with Expressionism. Kollwitz was the first woman elected to the Prussian Academy of Arts.

Kollwitz was born in Königsberg, Prussia, the fifth child in her family. Her father, Karl Schmidt, was a radical Social democrat who became a mason and house builder. Her mother, Katherina Schmidt, was the daughter of Julius Rupp, a Lutheran pastor who was expelled from the official Evangelical State Church and founded an independent congregation. Her education was greatly influenced by her grandfather's lessons in religion and socialism.

Recognizing her talent, Kollwitz's father arranged for her to begin lessons in drawing and copying plaster casts when she was twelve. At sixteen she began making drawings of working people, the sailors and peasants she saw in her father's offices. Wishing to continue her studies at a time when no colleges or academies were open to young women, Kollwitz enrolled in an art school for women in Berlin. There she studied with Karl Stauffer-Bern, a friend of the artist Max Klinger. The etchings of Klinger, their technique and social concerns, were an inspiration to Kollwitz.

At the age of seventeen, Kollwitz became engaged to Karl Kollwitz, a medical student. In 1888, she went to Munich to study at the Women's Art School, where she realized her strength was not as a painter, but a draughtsman. In 1890, she returned to Königsberg, rented her first studio, and continued to draw pained labourers working.

In 1891, Kollwitz married Karl, by this time a doctor, who tended to the poor in Berlin, where the couple moved into the large apartment that would be Kollwitz's home until it was destroyed in World War II. The proximity of her husband's practice proved invaluable:

It is believed Kollwitz suffered anxiety during her childhood due to the death of her siblings, including the early death of her younger brother, Benjamin. More recent research suggests that Kollwitz may have suffered from a childhood neurological disorder called Alice in Wonderland syndrome, commonly associated with migraines and sensory hallucinations.

Between the births of her sons – Hans in 1892 and Peter in 1896 – Kollwitz saw a performance of Gerhart Hauptmann's The Weavers, which dramatized the oppression of the Silesian weavers in Langenbielau and their failed revolt in 1844. Inspired, the artist ceased work on a series of etchings she had intended to illustrate Émile Zola's Germinal, and produced a cycle of six works on the weavers theme, three lithographs (Poverty, Death, and Conspiracy) and three etchings with aquatint and sandpaper (March of the Weavers, Riot, and The End). Not a literal illustration of the drama, the works were a free and naturalistic expression of the workers' misery, hope, courage, and eventually, doom.