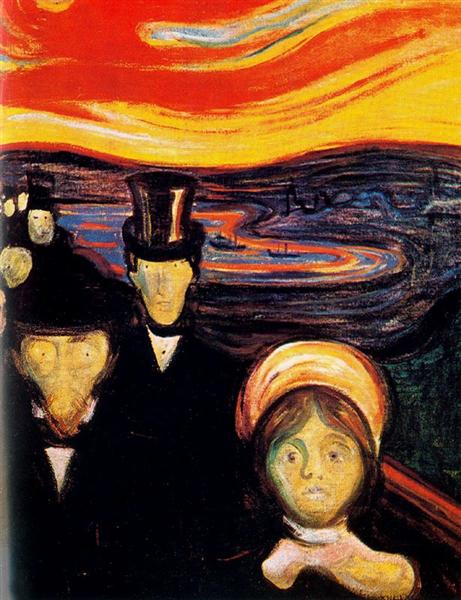 Expressionism was a modernist movement, initially in poetry and painting, originating in Germany at the beginning of the 20th century. Its typical trait is to present the world solely from a subjective perspective, distorting it radically for emotional effect in order to evoke moods or ideas. Expressionist artists sought to express the meaning of emotional experience rather than physical reality.

Expressionism was developed as an avant-garde style before the First World War. It remained popular during the Weimar Republic, particularly in Berlin. The style extended to a wide range of the arts, including expressionist architecture, painting, literature, theatre, dance, film and music.

The term is sometimes suggestive of angst. In a general sense, painters such as Matthias Grünewald and El Greco are sometimes termed expressionist, though in practice the term is applied mainly to 20th-century works. The Expressionist emphasis on individual perspective has been characterized as a reaction to positivism and other artistic styles such as Naturalism and Impressionism.

While the word expressionist was used in the modern sense as early as 1850, its origin is sometimes traced to paintings exhibited in 1901 in Paris by an obscure artist Julien–Auguste Hervé, which he called Expressionismes. Though an alternate view is that the term was coined by the Czech art historian Antonin Matějček in 1910, as the opposite of impressionism: "An Expressionist wishes, above all, to express himself... (an Expressionist rejects) immediate perception and builds on more complex psychic structures... Impressions and mental images that pass through mental peoples soul as through a filter which rids them of all substantial accretions to produce their clear essence [...and] are assimilated and condense into more general forms, into types, which he transcribes through simple short-hand formulae and symbols."

In 1905, a group of four German artists, led by Ernst Ludwig Kirchner, formed Die Brücke (the Bridge) in the city of Dresden. This was arguably the founding organization for the German Expressionist movement, though they did not use the word itself. A few years later, in 1911, a like-minded group of young artists formed Der Blaue Reiter (The Blue Rider) in Munich. The name came from Wassily Kandinsky's Der Blaue Reiter painting of 1903. Among their members were Kandinsky, Franz Marc, Paul Klee, and Auguste Macke. However, the term Expressionism did not firmly establish itself until 1913. Though mainly a German artistic movement initially and most predominant in painting, poetry and the theatre between 1910 and 1930, most precursors of the movement were not German. Furthermore, there have been expressionist writers of prose fiction, as well as non-German speaking expressionist writers, and, while the movement had declined in Germany with the rise of Adolf Hitler in the 1930s, there were subsequent expressionist works.