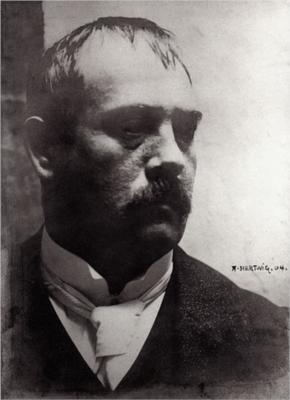 Lovis Corinth (21 July 1858 – 17 July 1925) was a German artist and writer whose mature work as a painter and printmaker realized a synthesis of impressionism and expressionism.

Corinth studied in Paris and Munich, joined the Berlin Secession group, later succeeding Max Liebermann as the group's president. His early work was naturalistic in approach. Corinth was initially antagonistic towards the expressionist movement, but after a stroke in 1911 his style loosened and took on many expressionistic qualities. His use of color became more vibrant, and he created portraits and landscapes of extraordinary vitality and power. Corinth's subject matter also included nudes and biblical scenes.

Corinth was born Franz Heinrich Louis on 21 July 1858 in Tapiau, in Prussia. The son of a tanner, he displayed a talent for drawing as a child. In 1876 he went to study painting in the academy of Königsberg. Initially intending to become a history painter, he was dissuaded from this course by his chief instructor at the academy, the genre painter Otto Günther. In 1880 he traveled to Munich, which rivaled Paris as the avant-garde art center in Europe at the time. There he studied briefly with Franz von Defregger before gaining admittance to the Academy of Fine Arts Munich, where he studied under Ludwig von Löfftz. The realism of Corinth's early works was encouraged by Löfftz's teaching, which emphasized careful observation of colors and values. Other important influences were Courbet and the Barbizon school, through their interpretation by the Munich artists Wilhelm Leibl and Wilhelm Trübner.

Except for an interruption for military service in 1882–83, Corinth studied with Löfftz until 1884. He then traveled to Antwerp, where he greatly admired the paintings of Rubens, and then in October 1884 to Paris where he studied under William-Adolphe Bouguereau and Tony Robert-Fleury at the Académie Julian. He concentrated especially on improving his drawing skills, and made the female nude his frequent subject. He was disappointed, however, in his repeated failure to win a medal at the Salon, and returned to Königsberg in 1888 when he adopted the name "Lovis Corinth".

In 1891, Corinth returned to Munich, but in 1892 he abandoned the Munich Academy and joined the Munich Secession. In 1894 he joined the Free Association, and in 1899 he participated in an exhibition organized by the Berlin Secession. These nine years in Munich were not his most productive, and he was perhaps better known for his ability to drink large amounts of red wine and champagne.

Corinth moved to Berlin in 1900, and had a one-man exhibition at a gallery owned by Paul Cassirer. In 1902 at the age of 43, he opened a school of painting for women and married his first student, Charlotte Berend, some 20 years his junior. Charlotte was his youthful muse, his spiritual partner, and the mother of his two children. She had a profound influence on him, and family life became a major theme in his art. Another of his students was Doramaria Purschian.