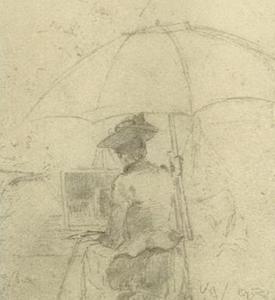 Self-portrait of artist at easel, 1891

Mildred Anne Butler was born at Kilmurry, near Thomastown, Co. Kilkenny, and spent most of her life living and painting in this tranquil and picturesque area. During the year 1885, she travelled widely in Europe. Later she studied briefly under William Calderon, an animal painter, and also at the painters’ colony in Newlyn, Cornwall. She was introduced to plein-air painting by the Limerick-born artist Norman Garstin (1847-1926). The artist began exhibiting her work in London and in Ireland in the 1890s and was elected an associate of the Royal Watercolour Society in 1896, becoming a member in 1937. Her subject matter is drawn from the countryside and is evocative of the quiet harmony of her surroundings in Kilkenny.

(Cited from the National Gallery of Ireland)

Mildred Anne Butler RA RWS (11 January 1858 – 11 October 1941) was an Irish artist, who worked in watercolour and oil of landscape, genre and animal subjects. Butler was born and spent most of her life in Kilmurry, Thomastown, County Kilkenny and was associated with the Newlyn School of painters.

Mildred Anne's en plein air style is dominated by the theme of nature and reflects scenes of domesticity around the family home in Kilmurry. She achieved distinction in her lifetime and exhibited in major galleries in Ireland and England. Among her patrons were Queen Mary of Teck and Louis IV, Grand Duke of Hesse.

She was one of the first academicians elected by the Ulster Academy of Arts in 1930. She virtually stopped painting by the 1930s due to arthritis and died in 1941, aged 83. Around four hundred pieces of her work were sold as part of the artist's studio sale in 1980. She is celebrated in an postage stamp by An Post.

Mildred Anne was born in 1858 in Kilmurry, a Georgian House near Thomastown and was the youngest daughter of Captain Henry Butler, a grandson of the Edmund Butler, 11th Viscount Mountgarret. Knowledge of Butler's life and working methods are almost entirely on the watercolours themselves and on her diaries, which are preserved for most years between 1892 and 1938. Butler’s quirky titles such as Ancient Rubbish, A Tit-Bit and Chucked; Green Eyed Jealousy: Ravens amongst trees show the artist’s playful sensibility. Her father, Henry Butler, was an amateur artist favouring subjects from nature he encountered on journeys abroad, in particular exotic plants and animals. Butler spent most of her life in the family home at Kilmurry with frequent trips to England and the continent. She continued painting until the 1930s when she stopped painting due to arthritis and died in 1941, aged 83.

Butler's father Henry may have encouraged her to paint in her youth but her artistic training began in London in the late 1880s with the watercolourist Paul Jacob Naftel, whom she credited for her understanding of watercolours. Butler like her friend Rose Barton, who also studied under Naftel, did not follow his choice of landscape, instead she devoted herself to cattle, birds, and flower gardens. She continued her studies at Westminster School of Art under William Frank Calderon who specialised in animal painting and later opened a school of animal painting. At Frank Calderon's School she studied the subject of cows, and it was that work for which she was elected to the Old Society, the Royal Academy.

In her late twentieths, Butler made annual visits to the continent until the outbreak of war. She travelled to France, Belgium, Switzerland and Italy. In Paris, she studied drawing, figure drawing and fine art painting. While in Paris she became associated with the Newlyn school and went on to spend the summers of 1894 and 1895 in Newlyn in Cornwall. Newlyn at that time was the centre for a group of artists who were interested in plein-air subjects, many of whom had previously studied in France. She was attached to the Newlyn School, and Norman Garstin's studio in particular alongside contemporaries such as Walter Osborne and Sir John Lavery. Garstin like Osborne had been a pupil of the Antwerp master Charles Verlat. Butler established a friendship with Luke Fildes, Stanhope Forbes whom she met at Newlyn. The influence of the Limerick-born Garstin, and Forbes, and the contact with the Newlyn School informed Butler's development and remained an important influence on her work throughout her life.