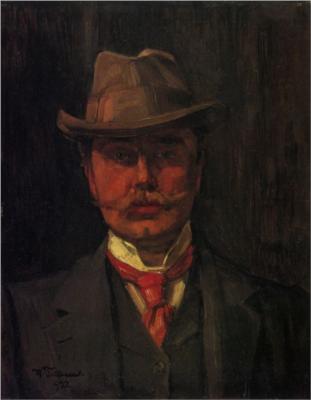 Trübner was born in Heidelberg and had early training as a goldsmith. In 1867 he met classicist painter Anselm Feuerbach who encouraged him to study painting, and he began studies in Karlsruhe under Fedor Dietz. The next year saw him studying at the Kunstacademie in Munich, where he was to be greatly impressed by an international exhibition of paintings by Leibl and Gustave Courbet. Courbet visited Munich in 1869, not only exhibiting his work but demonstrating his alla prima method of working quickly from nature in public performances. This had an immediate impact on many of the city's young artists, who found Courbet's approach an invigorating alternative to the shopworn academic tradition.

The early 1870s were a period of discovery for Trübner. He travelled to Italy, Holland and Belgium, and in Paris encountered the art of Manet, whose influence can be seen in the spontaneous yet restrained style of Trübner's portraits and landscapes. During this period he also made the acquaintance of Carl Schuch, Albert Lang and Hans Thoma, German painters who, like Trübner, greatly admired the unsentimental realism of Wilhelm Leibl. This group of artists came to be known as the "Leibl circle".

He published writings on art theory in 1892 and 1898, which express above all the idea that "beauty must lie in the painting itself, not in the subject". By urging the viewer to discover beauty in a painting's formal values, its colors, proportions, and surface, Trübner advanced a philosophy of "art for art's sake". In 1901 he joined the recently formed Berlin Secession, at the time Germany's most important forum for the exhibition of avant-garde art. From 1903 until his death in 1917 he was a professor at the Academy of Arts in Karlsruhe, also serving as director from 1904 to 1910.

Trübner's paintings are in many public collections, especially in Germany, including the Alte Nationalgalerie, Berlin, the Österreichische Galerie Belvedere, Vienna, and the Neue Pinakothek in Munich.