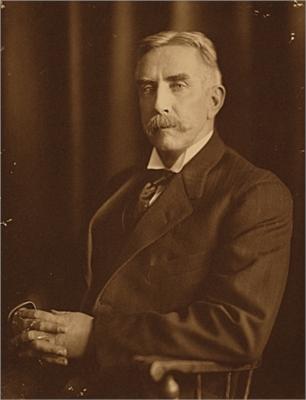 Thomas Pollock Anshutz (October 5, 1851 – June 16, 1912) was an American painter and teacher. Co-founder of The Darby School and leader at the Pennsylvania Academy of Fine Arts, Anshutz was known for his award-winning portraiture work and working friendship with Thomas Eakins.

Thomas Anshutz was born in Newport, Kentucky in 1851. He grew up in Newport and Wheeling, West Virginia. His early art instruction took place at the National Academy of Design in the early 1870s, where he studied under Lemuel Wilmarth. In 1875, he moved to Philadelphia and took a class taught by Thomas Eakins at the Philadelphia Sketch Club, a class which would solidify a close relationship and influence between Eakins and Anshutz. In 1892 Anshutz married Effie Shriver Russell. The two spent their honeymoon in Paris, where Anshutz attended classes at Académie Julian. In 1893 they returned to Philadelphia. Later in his life he proclaimed himself a socialist. He retired from teaching in the fall of 1911 due to poor health and died on June 16, 1912.

Eakins began teaching at the Pennsylvania Academy of the Fine Arts in 1876, the same year that Anshutz enrolled as a student. Eakins was Chief Demonstrator of Anatomy and Christian Schussele was Professor of Drawing and Painting. In 1878 Anshutz became Eakins's assistant, eventually succeeding Eakins as Chief Demonstrator when Eakins was promoted to Professor of Drawing and Painting. In 1880, while still a student, Anshutz completed his first major work, The Ironworkers' Noontime.

The Ironworkers' Noontime, Anshutz's most well known painting, depicts twenty-or-so workers on their break in the yard of a foundry. Painted near Wheeling, West Virginia, it is conceived in a naturalistic style similar to that of Eakins, although Eakins never painted industrial subjects. The piece was exhibited at the Philadelphia Sketch Club in 1881 and compared to Eakins's work by art critics. Art historian Randall C. Griffin has written of it: "One of the first American paintings to depict the bleakness of factory life, The Ironworkers' Noontime appears to be a clear indictment of industrialization. Its brutal candor startled critics, who saw it as unexpectedly confrontational—a chilling industrial snapshot not the least picturesque or sublime." It is now in the collection of the Fine Arts Museums of San Francisco.

Around 1880 Eakins became involved in photography, incorporating it into his classes and using it as a tool for his artwork. Anshutz and other students at the Academy started to make use of the camera, posing models and making prints for study. Anshutz participated in Eakins's The Naked Series, photographing nude models in seven pre-defined standing poses. He modeled for Eakins himself, along with colleagues such as J. Laurie Wallace and Covington Few Seiss, who would pose outdoors nude, often wrestling, swimming and boxing. Eadweard Muybridge eventually made his way to Philadelphia and Anshutz and Eakins helped build Muybridge's zoopraxiscope.

Eakins was forced to resign from the Academy in an 1886 scandal that was sparked by his use of a fully nude male model in front of either an all-female or a mixed-male-and-female class. Anshutz did not defend his mentor, in fact, he turned against him. Anshutz co-signed a letter to the Philadelphia Sketch Club: "We hereby charge Mr. Thoms Eakins with conduct unworthy of a gentleman & discreditable to this organization & ask his expulsion from the club."