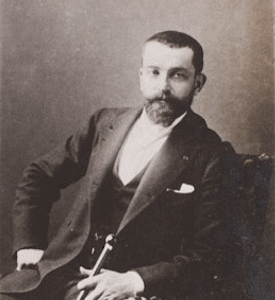 Henri Gervex studied at École des Beaux-Arts under Alexandre Cabanel and apprenticed to Eugène Fromentin. While his early work belongs to the mythological genre and he painted genre pictures with brilliant ease, Gervex afterwards devoted himself to representations of modern life. Influenced by impressionism as a painter intimately aware of the works of Edouard Manet and Edgar Degas, he was also committed to the traditions of realism and the Academy in the creation of his own imagery during the late 1870s and 1880s.

His early work belonged almost exclusively to the mythological genre, which served as an excuse for the painting of the nude, but not always in the best of taste. His Rolla of 1878, based on a poem by Alfred de Musset, was rejected by the jury of the Salon de Paris for immorality, since it depicted a scene from the poem of a naked prostitute after having sex with her client.

Gervex afterwards devoted himself to representations of modern life and achieved signal success with his Dr Péan at the Salpétrière ("The Operation"), a modernized paraphrase, as it were, of Rembrandt's Anatomy Lesson.

He was entrusted with several important official paintings and the decoration of public buildings. Among the first are The Distribution of Awards (1889) at the Palais de l'Industrie, The Coronation of Nicolas II, The Mayors' Banquet (1900), and the portrait group La République Française; and among the second, the ceiling for the Salle des Fêtes (ballroom) at the Hôtel de Ville, Paris, and the decorative panels painted in conjunction with Emile-Henri Blanchon for the mairie of the 19th arrondissement, Paris. He also painted, with Alfred Stevens, a panorama, The History of the Century (1889). The Musée du Luxembourg holds his painting Satyr Sporting with a Bacchante, as well as the large Members of the Jury of the Salon (1885). Other pictures of importance, besides numerous portraits in oils and pastel, are Communion at Trinity Church, Return from the Ball, Diana and Endymion, Job, Civil Marriage, At the Ambassadeurs, Yachting in the Archipelago, Nana and Maternity.

In 1913 he was elected to the Académie des Beaux-Arts.