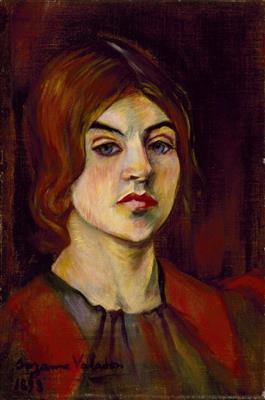 Suzanne Valadon (23 September 1865 – 7 April 1938) was a French painter and artists' model who was born Marie-Clémentine Valadon at Bessines-sur-Gartempe, Haute-Vienne, France. In 1894, Valadon became the first woman painter admitted to the Société Nationale des Beaux-Arts. She was also the mother of painter Maurice Utrillo. The subjects of her drawings and paintings included mostly female nudes, female portraits, still lifes, and landscapes. She never attended the academy and was never confined within a tradition. Valadon spent nearly 40 years of her life as an artist.

Valadon grew up in poverty with her mother, an unmarried laundress; she did not know her father. Known to be quite independent and rebellious, she attended primary school until age 11. In 1883, aged 18, Valadon gave birth to her illegitimate son, Maurice Utrillo. Valadon’s mother cared for Maurice while she returned to modelling. Valadon's friend Miguel Utrillo would later sign papers recognizing Maurice as his son, although his true paternity is uncertain. Valadon helped to educate herself in art by reading Toulouse-Lautrec’s books and observing the artists at work for whom she posed.

In 1893, Valadon began a short-lived affair with composer Erik Satie, moving to a room next to his on the Rue Cortot. Satie became obsessed with her, calling her his Biqui, writing impassioned notes about "her whole being, lovely eyes, gentle hands, and tiny feet", but after six months she left, leaving him devastated. Valadon married stockbroker Paul Moussis in 1895, leading a bourgeois life for 13 years at an apartment in Paris and a house in the outlying region. In 1909, Valadon began an affair with the painter André Utter, the 23-year-old friend of her son, divorcing Moussis in 1913. Valadon married Utter in 1914, and he managed her career as well as her son's. Valadon and Utter regularly exhibited work together until the couple divorced in 1934.

Valadon was well-known during her lifetime but within the art historical narrative her work has long been overshadowed by a Bohemian and lower class lifestyle.

Valadon began working at age 11 in a variety of areas including a milliner’s workshop, a factory making funeral wreaths, a market selling vegetables, a waitress, and then finally in the circus. At the age of 15 Valadon met, Count Antoine de la Rochefoucauld and Thèo Wagner, two symbolist painters who were involved in decorating circus belonging to Medrano. Through this connection she began work at the Mollier circus as an acrobat, but a year later, a fall from a trapeze ended that career. The circus was frequented by artists such as Lautrec, Sescau and Berthe Morisot and it is believed this is where Morisot did her painting of Valadon.

In the Montmartre quarter of Paris, she pursued her interest in art, first working as a model for artists, observing and learning their techniques, before becoming a noted painter herself. She began painting full-time in 1896.

Valadon debuted as a model in 1880 in Montmartre at age 15. She modeled for over 10 years for many different artists including Pierre-Cécile Puvis de Chavannes, Théophile Steinlen Pierre-Auguste Renoir, Jean-Jacques Henner, and Henri de Toulouse-Lautrec. She modeled under the name “Maria,” eventually being nicknamed “Suzanne” after the biblical story of Susanna and the Elders. She was considered a very focused, ambitious, rebellious, determined, self-confident, and passionate woman. In the early 1890s, she befriended Edgar Degas who, impressed with her bold line drawings and fine paintings, purchased her work and encouraged her; she remained one of his closest friends until his death. Art historian Heather Dawkins believed that Valadon's experience as a model added depth to her own images of nude women, which tended to be less idealized than that of the male post impressionists representations.