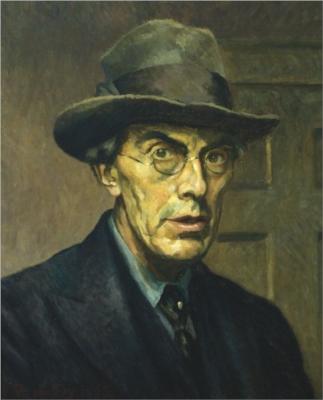 Roger Eliot Fry (14 December 1866 – 9 September 1934) was an English painter and critic, and a member of the Bloomsbury Group. Establishing his reputation as a scholar of the Old Masters, he became an advocate of more recent developments in French painting, to which he gave the name Post-Impressionism. He was the first figure to raise public awareness of modern art in Britain, and emphasised the formal properties of paintings over the "associated ideas" conjured in the viewer by their representational content. He was described by the art historian Kenneth Clark as "incomparably the greatest influence on taste since Ruskin ... In so far as taste can be changed by one man, it was changed by Roger Fry". The taste Fry influenced was primarily that of the Anglophone world, and his success lay largely in alerting an educated public to a compelling version of recent artistic developments of the Parisian avant-garde.

Born in London, the son of the judge Edward Fry, he grew up in a wealthy Quaker family in Highgate. Fry was educated at Clifton College and King's College, Cambridge, where he was a member of the Conversazione Society, alongside freethinking men who would shape the foundation of his interest in the arts, including John McTaggart and Goldsworthy Lowes Dickinson. After taking a first in the Natural Science tripos, he went to Paris and then Italy to study art. Eventually he specialised in landscape painting.

In 1896, he married the artist Helen Coombe and they subsequently had two children, Pamela and Julian. Helen soon became seriously mentally ill, and in 1910 was committed to a mental institution, where she remained for the rest of her life. Fry took over the care of their children with the help of his sister, Joan Fry. That same year, Fry met the artists Vanessa Bell and her husband Clive Bell, and it was through them that he was introduced to the Bloomsbury Group. Vanessa's sister, the author Virginia Woolf later wrote in her biography of Fry that "He had more knowledge and experience than the rest of us put together".

In 1911, Fry began an affair with Vanessa Bell, who was recovering from a miscarriage. Fry offered her the tenderness and care she felt was lacking from her husband. They remained lifelong close friends, even though Fry's heart was broken in 1913 when Vanessa fell in love with Duncan Grant and decided to live permanently with him.

After short affairs with artists Nina Hamnett and Josette Coatmellec, Fry too found happiness with Helen Maitland Anrep. She became his emotional anchor for the rest of his life, although they never married (she too had had an unhappy first marriage, to the mosaicist Boris Anrep).

Fry died unexpectedly after a fall at his home in London. His death caused great sorrow among the members of the Bloomsbury Group, who loved him for his generosity and warmth. Vanessa Bell decorated his casket before his ashes were placed in the vault of Kings College Chapel in Cambridge. Virginia Woolf was entrusted with writing his biography, published in 1940.