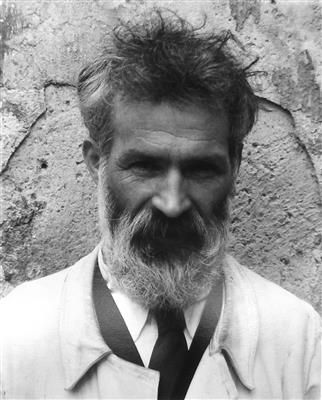 Constantin Brâncuși (Romanian: [konstanˈtin brɨŋˈkuʃʲ] ( listen); February 19, 1876 – March 16, 1957) was a Romanian sculptor, painter and photographer who made his career in France. Considered a pioneer of modernism, one of the most influential sculptors of the 20th-century, Brâncuși is called the patriarch of modern sculpture. As a child he displayed an aptitude for carving wooden farm tools. Formal studies took him first to Bucharest, then to Munich, then to the École des Beaux-Arts in Paris from 1905 to 1907. His art emphasizes clean geometrical lines that balance forms inherent in his materials with the symbolic allusions of representational art. Brâncuși sought inspiration in non-European cultures as a source of primitive exoticism, as did Paul Gauguin, Pablo Picasso, André Derain and others. However, other influences emerge from Romanian folk art traceable through Byzantine and Dionysian traditions.

Brâncuși grew up in the village of Hobiţa, Gorj, near Târgu Jiu, close to Romania's Carpathian Mountains, an area known for its rich tradition of folk crafts, particularly woodcarving. Geometric patterns of the region are seen in his later works.

His parents Nicolae and Maria Brâncuși were poor peasants who earned a meager living through back-breaking labor; from the age of seven, Constantin herded the family's flock of sheep. He showed talent for carving objects out of wood, and often ran away from home to escape the bullying of his father and older brothers.

At the age of nine, Brâncuși left the village to work in the nearest large town. At 11 he went into the service of a grocer in Slatina; and then he became a domestic in a public house in Craiova where he remained for several years. When he was 18, Brâncuși created a violin by hand with materials he found around his workplace. Impressed by Brâncuși's talent for carving, an industrialist entered him in the Craiova School of Arts and Crafts (școala de arte și meserii), where he pursued his love for woodworking, graduating with honors in 1898.

He then enrolled in the Bucharest School of Fine Arts, where he received academic training in sculpture. He worked hard, and quickly distinguished himself as talented. One of his earliest surviving works, under the guidance of his anatomy teacher, Dimitrie Gerota, is a masterfully rendered écorché (statue of a man with skin removed to reveal the muscles underneath) which was exhibited at the Romanian Athenaeum in 1903. Though just an anatomical study, it foreshadowed the sculptor's later efforts to reveal essence rather than merely copy outward appearance.

In 1903, Brâncuși traveled to Munich, and from there to Paris. In Paris, he was welcomed by the community of artists and intellectuals brimming with new ideas. He worked for two years in the workshop of Antonin Mercié of the École des Beaux-Arts, and was invited to enter the workshop of Auguste Rodin. Even though he admired the eminent Rodin he left the Rodin studio after only two months, saying, "Nothing can grow under big trees."

After leaving Rodin's workshop, Brâncuși began developing the revolutionary style for which he is known. His first commissioned work, The Prayer, was part of a gravestone memorial. It depicts a young woman crossing herself as she kneels, and marks the first step toward abstracted, non-literal representation, and shows his drive to depict "not the outer form but the idea, the essence of things." He also began doing more carving, rather than the method popular with his contemporaries, that of modeling in clay or plaster which would be cast in metal, and by 1908 he worked almost exclusively by carving.