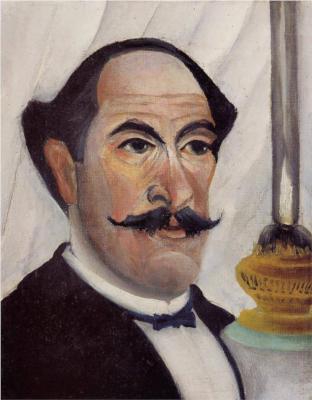 Self-Portrait with a Lamp - Henri Rousseau

As a self-taught painter, Henri Rousseau was completely untrained in any established art techniques. He is best known for his naïve, or primitive, childlike jungle scenes. He was good at painting and music as a child, but spent most of his life in the profession of a customs officer at the outskirts of town. Because of this, he was also referred to as Le Douanier, or the “Customs Officer.” He started painting seriously at the age of forty and by the time he was 49 he retired from his job in order to paint full time.
Although the painting establishment laughed and ridiculed his artistic style, he was highly regarded by artists who were outside the establishment, such as Picasso, Jean Hugo, Leger, Beckman, and later, painters of the Surrealist style. He was unaware that he was considered untrained by established painters, and believed himself to be a great realist painter. As such, he regarded himself very highly, and in his opinion, Picasso and he were the only two great living artists.
Rousseau’s painting style was unlike that on any other primitive painter, and many of his paintings were jungle scenes. Although he had never been to a jungle (he actually never left France), many of his paintings depicted oversized plants and wild animals lurking in the shadows. He made many trips to the botanical gardens, perused illustrated books, and observed closely studied taxidermied animals. There is a tale that he traveled to Mexico and fought in the subtropics as he was in the army, but this legend is untrue. He did, however, interview may soldiers who had served in the jungle in Mexico about their travels through the subtropics.
He also developed the painting style of portrait landscape, in which he would place a person or a couple in the foreground of a landscape painting. He may have been ridiculed during his lifetime, but he is now considered a self-trained genius, who created works of high artistic quality. His work has also been an inspiration for the contemporary animated film “Madagascar.”

Henri Julien Félix Rousseau (French: [ɑ̃ʁi ʒyljɛ̃ feliks ʁuso]; May 21, 1844 – September 2, 1910) was a French post-impressionist painter in the Naïve or Primitive manner. He was also known as Le Douanier (the customs officer), a humorous description of his occupation as a toll and tax collector. He started painting seriously in his early forties; by age 49, he retired from his job to work on his art full-time.

Ridiculed during his lifetime by critics, he came to be recognized as a self-taught genius whose works are of high artistic quality. Rousseau's work exerted an extensive influence on several generations of avant-garde artists.

Rousseau was born in Laval, Mayenne, France, in 1844 into the family of a plumber; he was forced to work there as a small boy. He attended Laval High School as a day student, and then as a boarder after his father became a debtor and his parents had to leave the town upon the seizure of their house. Though mediocre in some of his high school subjects, Rousseau won prizes for drawing and music.

After high school, he worked for a lawyer and studied law, but "attempted a small perjury and sought refuge in the army." He served four years, starting in 1863. With his father's death, Rousseau moved to Paris in 1868 to support his widowed mother as a government employee.

In 1868, he married Clémence Boitard, his landlord's 15-year-old daughter, with whom he had six children (only one survived). In 1871, he was appointed as a collector of the octroi of Paris, collecting taxes on goods entering Paris. His wife died in 1888 and he married Josephine Noury in 1898.

From 1886, he exhibited regularly in the Salon des Indépendants, and, although his work was not placed prominently, it drew an increasing following over the years. Tiger in a Tropical Storm (Surprised!) was exhibited in 1891, and Rousseau received his first serious review when the young artist Félix Vallotton wrote: "His tiger surprising its prey ought not to be missed; it's the alpha and omega of painting." Yet it was more than a decade before Rousseau returned to depicting his vision of jungles.

In 1893, Rousseau moved to a studio in Montparnasse where he lived and worked until his death in 1910. In 1897, he produced one of his most famous paintings, La Bohémienne endormie (The Sleeping Gypsy).

In 1905, Rousseau's large jungle scene The Hungry Lion Throws Itself on the Antelope was exhibited at the Salon des Indépendants near works by younger leading avant-garde artists such as Henri Matisse, in what is now seen as the first showing of The Fauves. Rousseau's painting may even have influenced the naming of the Fauves.

In 1907, he was commissioned by artist Robert Delaunay's mother, Berthe, Comtesse de Delaunay, to paint The Snake Charmer.

When Pablo Picasso happened upon a painting by Rousseau being sold on the street as a canvas to be painted over, the younger artist instantly recognised Rousseau's genius and went to meet him. In 1908, Picasso held a half serious, half burlesque banquet in his studio at Le Bateau-Lavoir in Rousseau's honour. Le Banquet Rousseau, "one of the most notable social events of the twentieth century," wrote American poet and literary critic John Malcolm Brinnin, "was neither an orgiastic occasion nor even an opulent one. Its subsequent fame grew from the fact that it was a colorful happening within a revolutionary art movement at a point of that movement's earliest success, and from the fact that it was attended by individuals whose separate influences radiated like spokes of creative light across the art world for generations."