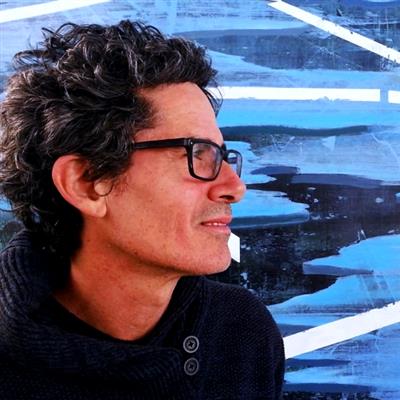 Luis Enrique Silvestre Guerra (born on April 4th, 1966 in Havana, Cuba) is a contemporary Cuban painter, part of the '90s generation of Cuban Artists working in the Special Period, a period of acute economic crisis and rising censorship. In 1999 he left Cuba and moved to Brazil, where he established a studio in the city of São Paulo. His work uses several visual references from Naif to Pop Art to Abstract Expressionism, to make a commentary on his memories of Cuba, its idiosyncrasies, and life as an expatriate.


Silvestre lived his early years with his grandparents in the model town of Hershey. Returning to Havana, he studied at the Escuela Nacional de Bellas Artes San Alejandro (San Alejandro National Fine Arts School) and the ISDi Instituto Superior de Diseño (Superior Institute of Design). He worked from 1987 to 1995 as a graphic designer and illustrator at Revista Bohemia (Bohemia Magazine), an influential news and culture magazine published since 1906.

In his early career during the '90s, Silvestre developed a series of self-portraits using Naif figurative studies inspired by Henri Rousseau and Frida Kahlo, called Toda Yerba És Carne (Every Herb is Flesh). The series was a critique of the Special Period, using satire and surrealism. Silvestre continued exhibiting with other artists from his generation in the few spaces allowed by the Cuban government until 1999 when he decided to move abroad.


In Brazil, he met the works of Tunga, Cildo Meireles, Arthur Bispo do Rosário and art movements like Anthropophagy and Concretism. He later started an intense dialogue with his Cuban roots and themes. The series X.Y.Z is an iconographic journey through the Afro-Cuban heritage and myths. The series Hershey: Memorias Afectivas revisits his life in the model town and its decadence. Cisnes Huecos tells the story of Cuban balseros through an episode of scape from Berlin during the Cold War. The series Un Pinguino en el Mercado da Arte (A Penguin at the Art Market) speaks about the difficulties of expatriates to rebuild their relations in the new country.