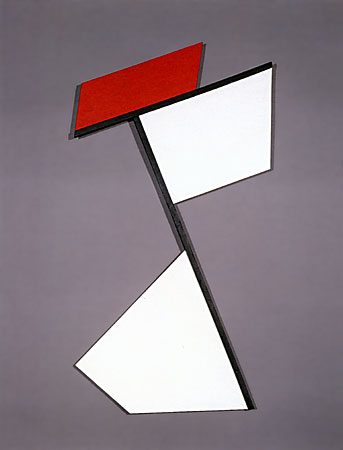 Concrete art is an art movement with a strong emphasis on abstraction. The artist Theo van Doesburg, closely associated with the De Stijl art movement, coined the term "concrete art" as he in 1930 founded the group Art Concret and articulated its features in a manifesto titled "The Basis of Concrete Art", signed by four other artists of the group, including Otto G. Carlsund, Jean Hélion and Leon Tutundjian. The manifesto explained that the resultant art should be non-referential insofar as its components should not refer to, or allude to, the entities normally encountered in the natural, visible world. This is a distinction from abstraction generally. In a more general sense "abstract art" could and often does include the "abstraction of forms in nature". But "concrete art" was intended to emanate "directly from the mind" and consequently to be more "cerebral" than abstract art generally. Concrete art is often composed of basic visual features such as planes, colors, and forms. "Sentiment" tends to be absent from concrete art. The "hand" of the artist may be difficult to detect in finished works of concrete art; concrete art may appear, in some instances, to have been made by a machine. Concrete art often has a core visual reference to geometry whereas more general abstract art may find its basis in the components of the natural world. A formulation of a description of concrete art might include a considerable reliance on the formal qualities of an artwork. Theo Van Doesburg's manifesto stated that art "should receive nothing from nature's formal properties or from sensuality or sentimentality. We want to exclude lyricism, dramaticism, symbolism, etc…." In concrete art a mathematical equation can serve as a starting point. Concrete art can include painting and sculpture.

The term was popularized by the artist Josef Albers, and the artist Max Bill further promoted the ideas associated with concrete art, organizing the first international exhibition in 1944. The movement came to fruition in Northern Italy and France in the 1940s and 1950s through the work of the groups Movimento d'arte concreta (MAC) and Espace. In 1960 Max Bill organized a large exhibition of Concrete Art in Zürich illustrating 50 years of its development.