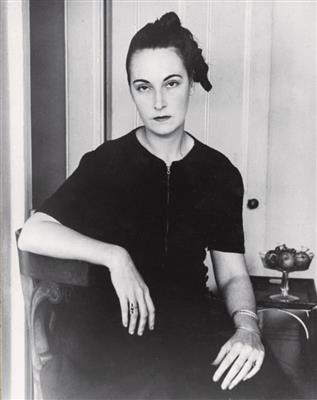 Carmen Herrera (born May 31, 1915) is a Cuban-American abstract, minimalist painter. She was born in Havana and has lived in New York City since the mid-1950s. Herrera's abstract works have brought her international recognition late in life. She turned 100 in May 2015.

Born in Havana in 1915, Herrera was one of seven siblings. Her father was the founding editor of the newspaper El Mundo, where her mother was a reporter. Herrera began taking private art lessons from professor Federico Edelmann y Pinto when she was eight years old. Herrera attributes these lessons to her facility for discipline and for providing her with the fundamentals of academic drawing. She furthered her training in 1929, at the age of 14, when she attended the Marymount School in Paris. In 1938, Herrera continued her education at the Universidad de la Habana to study architecture, where she stayed for only one academic year. This year had a strong impact on Herrera and she is quoted as saying, “There, an extraordinary world opened up to me that never closed: the world of straight lines, which has interested me until this very day."

In 1939, Herrera married English teacher Jesse Loewenthal (1902–2000), whom she had met in 1937 when he was visiting Cuba from New York. She moved to New York to be with him and they lived in his apartment on East Nineteenth Street. From 1943 to 1947, she studied at the Art Students League in New York City, where she had received a scholarship. Here, she studied painting with Jon Corbino (1905–1964). She left the Art Students League in 1943 when she felt that she had learned all that she could from Corbino. She then began taking printmaking classes at the Brooklyn Museum, but left there after a year. In New York, Herrera struggled with being included in museum exhibitions, and felt that Havana would have provided her with more opportunities than she was offered in the United States.

In 1948, Herrera and Loewenthal moved to Paris, where they stayed for nearly five years. At the time, the city was a meeting place for various artistic styles and movements, including influences from the Bauhaus and Russian Suprematism. Herrera began to refine her hard edge, non-objective style during this time period, although, as Whitney Curator Dana Miller comments, her work still contained “a lot of vibrancy and life," as well as an “almost spiritual quality." Her style at the time has been retrospectively compared to the work of Elsworth Kelly, who was also working in Paris during these years, but who received far more publicity.

In 1951, Herrera made a return trip to Cuba where she painted a series of highly gestural abstract paintings. The works produced on this trip were reflective of contemporary developments in abstraction and have a style and color palette that is not seen again in Herrera’s works. She attempted to display these works in a solo show in December 1950 in Havana at the Lyceum, but the audience was not receptive.