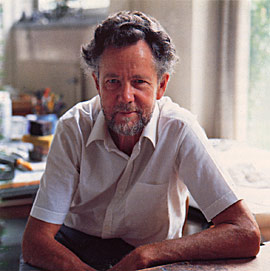 Lennart Rodhe enrolled as a student in 1934 at Edward Berggrens studio at Tekniska skolan in Stockholm, and studied under Peter Rostrup-Boyesen i Copenhagen and at the Royal University College of Fine Arts in Stockholm 1938–44 with Sven X:et Erixon as teacher. He also studied anatomy at Kunstakademiet i Köpenhamn. Lennart Rodhe is considered one of the most prominent of the Swedish modernists, notable as a professor at Royal University College of Fine Arts in Stockholm, as someone who strongly influenced his students, such as Peter Dahl and Olle Bauman, although his strict methods of education based on the study of model drawing scared off some students.

He was also a member of 1947 års män (the men of the year 1947), who in 1947 exhibited at the exhibition Ung konst at Gallery Färg och Form at Brunkebergstorg in Stockholm. He was awarded the Prince Eugen Medal for painting in 1967.