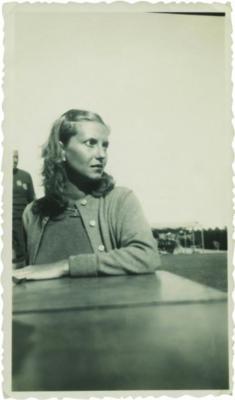 Lidia "Lidy" Elena Prati (1921–2008) was an Argentine painter who was known for her abstract, geometric paintings. During the 1940s, Prati was one of the founding members of the Asociación Arte Concreto-Invención (AACI) art movement (or Concrete-Invention Art Association) along with Enio Iommi and Tomás Maldonado.

Lidia Elena Prati was born in Resistencia, Chaco, Argentina in 1921. In 1942 she had her first ever exhibition at the Salon Peuser in Buenos Aires. She married her fellow artist Tomás Maldonado in 1944. During that same year, Prati and Maldonado were both artists in the Argentinian artistic movement Madí.

In 1944 Prati contributed to the one-time publication Arturo. This publication was spearheaded by a group of artists, including Carmelo Arden Quin, Gyula Kosice, and Rhod Rothfuss, and it is now considered to be an important precursor to the later avant-garde Concrete-Invention and Madí art movements in Argentina. The Quin, Kosice and Rothfuss would later form Madí and Maldonado the Concrete-Invention group, respectively. Other artists who contributed to Arturo included Joaquín Torres García, Piet Mondrian, and Wassily Kandinsky.

In 1945 Edgar Bayley labeled the Argentine response to the European Concrete art movement invencionismo. This same group of artists that Bayley identified would later become the Asociación Arte Concreto-Invención art movement. In August 1946 Prati was one of the signatories of the Inventionist Manifesto that was published in the first edition of the groups magazine, Art Concreto. In line with the abstract, non-figurative leanings of the Concrete-Inventionists, Prati's paintings during this period were highly abstract, geometric, and colorful. Indeed, a key influence on her aesthetic style was the minimalist Piet Mondrian. She also experimented with shaped canvases. In 1950 she participated in the Arte Concreto exhibition at the Instituto De Arte Moderno in Buenos Aires.

In 1952 Prati traveled to Europe. During this time she befriended the Swiss artist Max Bill, who was an early practitioner of European Concrete art. In 1952 Prati joined the Grupo de Artistas Modernos de la Argentina, a multi-disciplinary art movement, at the request of the Argentine poet Aldo Pellegrini. In 1952 Prati exhibited with the group in an exhibition entitled Grupo de Artistas Modernos de la Argentina that Pellegrini organized at the Viau Galería de Arte in Buenos Aires.

In the mid-1950s, Prati abandoned painting in favor of graphic design, jewelry and textiles.

In 1963 Prati not only took part in but also designed the exhibition poster for 20 Años de Arte Concreto (or "20 Years of Concrete Art") at the Buenos Aires Museum of Modern Art.

Prati's work can be found in a number of public collections, including: