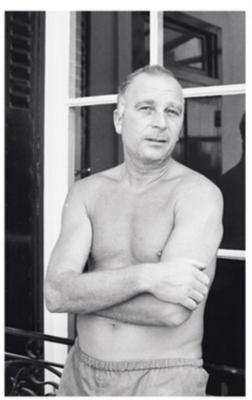 Günter Fruhtrunk (May, 1923 - 12 December 1982) was a German painter and printmaker, who is classified as a geometric abstract artist and whose work relates to Op Art.

Fruhtrunk studied architecture at the Technische Hochschule in Munich, which he gave up after two semesters to join the army as a volunteer in the fall of 1941. In 1945, Fruhtrunk began to study privately under the painter and printmaker William Straube in Neufrach, who was a student of Hölzel and Matisse. In 1954 he received a scholarship from the Land Baden-Württemberg and the Gouvernement Français and moved to Paris, to work in the studios of Léger and Arp. During the 1960s the painter mainly lived and worked in France. In 1961 he received the Prix Jean Arp in Cologne and in 1966 he was awarded the silver medal of the Prix d'Europe in Ostende. In 1963 he appeared in the film documentary "School of Paris: (5 Artists at Work)" by American filmmaker Warren Forma. In 1967, Fruhtrunk began teaching at the Munich art academy. It was Fruhtrunk who transformed the ideas of Constructivism to a colorful rhythmical pictorial world, by creating a dynamic language of form with vector-like diagonal lines arranged strictly rhythmically according to their alternating colors. Fruhtrunk committed suicide in his studio at the Munich art academy on 12 December 1982.