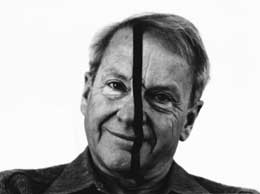 François Morellet (30 April 1926 – 10 May 2016) was a French contemporary painter, sculptor, and light artist. His early work prefigured minimal art and conceptual art, and he played a prominent role in the development of geometrical abstract art.

After a short period of figurative/representational work, Morellet turned to abstraction in 1950 and he adopted a pictorial language of simple geometric forms: lines, squares and triangles assembled into two-dimensional compositions. In 1961, he was one of the founders of the Groupe de Recherche d’Art Visuel (GRAV), with fellow artists Francisco Sobrino, Horatio Garcia-Rossi, Hugo DeMarco, Julio Le Parc, Jean-Pierre Yvaral (the son of Victor Vasarely), Joël Stein, Vera Molnár and François Molnár (the last two left the group shortly after). Morellet began at this time to work with neon tube lighting.

From the 1960s on, Morellet worked in various materials (fabric, tape, neon, walls...) and in doing so investigated the use of the exhibition space in terms similar to artists of installation art and environmental art. He gained an international reputation, especially in Germany and France, and he was commissioned to create work for public and private collections in Switzerland, Great Britain, Italy, the Netherlands and the U.S.. One of his works is part of the permanent collection of the Centre for International Light Art (CILA) in Unna, Germany. In 2016/2017, the CILA stages a retrospective of Morellet's Light Art, the last exhibition to be curated by the artist himself, shortly before his death in May 2016.

For Morellet, a work of art referred only to itself. His titles are generally sophisticated, show some word play, and describe the "constraints" or "rules" that he used to create them. Like other contemporary artists who use constraints and chance (or the aleatory) in their works (John Cage in music, the Oulipo group in literature), Morellet used rules and constraints established in advance to guide the creation of his works, and also allowed chance to play a role in some of his compositions.

His rigorous use of geometry tends to create emotionally neutral work, and placed him close to Minimal art and Conceptual art in his aims. He shared a particular affinity to the American artists Ellsworth Kelly, Frank Stella and Sol LeWitt.